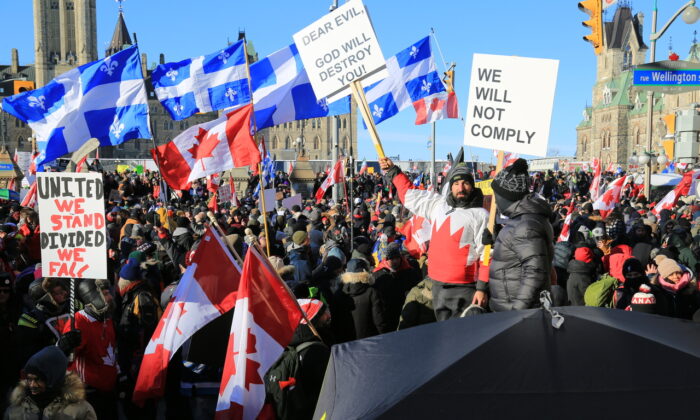 The Canadian “Freedom Convoy” raised more than $3 million on GiveSendGo after GoFundMe removed its campaign amid controversy over how the nearly $10 million would be handled.

A new petition from the Canadian Freedom Convoy raised some $3.2 million out of a $16 million target on GiveSendGo, which was down on Saturday. The company said that it was being targeted by “heavy DDOS and bot attacks,” but on Sunday morning, the fundraising platform appeared to be online.

“In spite of all of this we still have managed to raise funds 5X faster than the gfm did,” the company said, referring to GoFundMe. “GFM raised 10mil in 3 weeks. GSG campaign has already raised over 1.1mil in just over 12 hours!”

The original GoFundMe appeal had raised some $9 million before the platform’s management said it would withhold money to the truckers in the midst of a public pressure campaign. Several Republican attorneys general, including Florida Attorney General Ashley Moody, said they would investigate whether any laws were broken by GoFundMe.

GoFundMe confirmed last week that it is preventing the funds from going to the Freedom Convoy’s organizers and would send the money to other charities. The platform said that law enforcement officials have “evidence” that “the previously peaceful demonstration has become an occupation, with police reports of violence and other unlawful activity,” without elaborating on how it has become an “occupation.”

In their GiveSendGo fundraiser, the organizers of the convoy—which has been parked in downtown Ottawa, Canada, in a bid to overturn COVID-19 vaccine mandates—said the truckers and others “are taking our fight to the doorsteps of our Federal Government and demanding that they cease all mandates against its people.”

“We are a peaceful country that has helped protect nations across the globe from tyrannical governments who oppressed their people, and now it seems it is happening here.”

Over the weekend, billionaire Tesla CEO Elon Musk noted that GoFundMe appeared to previously support the Capitol Hill Organized Protest, or CHOP, also known as the Capitol Hill Autonomous Zone, during weeks of George Floyd-inspired rioting and violence in Seattle during the summer of 2020. Several deaths were reported in CHOP, including a 16-year-old teen, before police dismantled it.

GoFundMe has not yet responded to a request for comment.