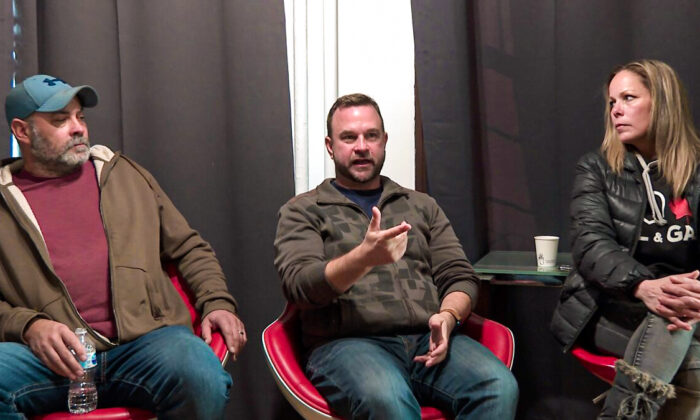 Chris Barber and Tamara Lich, two lead organizers of the Freedom Convoy protest, have been arrested in Ottawa, according to reports online.

While the Ottawa Police Service told The Epoch Times it cannot confirm or deny the arrests until charges are laid, attorney Chris Wilson who has represented the organizers in past cases confirmed that Barber was arrested in a tweet posted on the evening of Feb. 17. Hours after Barber’s arrest, the Freedom Convoy’s Twitter account posted a video showing the arrest of Lich.

Tamara Lich has been arrested, but we will continue to #holdtheline pic.twitter.com/GaPZdsrhVe

Despite the arrests, many protesters still remain in Ottawa. The protests started as a demonstration by truck drivers opposed to the federal government’s requirement of COVID-19 vaccination for drivers crossing the U.S.-Canada border, but became a large movement as more people from across the country joined the cause to remove all COVID-19 mandates and restrictions. Convoys of protesting trucks and vehicles first converged in Ottawa on Jan. 29, with many camping by Parliament.

Barber and Lich are also listed among three protest organizers named in the class action lawsuit filed with the Ontario Superior Court of Justice by lawyer Paul Champ on behalf of his client Zexi Li, a public servant.

The arrests come after the Trudeau government’s invocation of the Emergencies Act on Feb. 14, marking the first time the sweeping measure has been used since becoming law in 1988.

In a press conference on Feb. 14, Lich said despite the government’s use of the Act, protesters will remain in Ottawa, but they will be peaceful.

Here is convoy organizer Chris Barber being arrested. He remained peaceful, and did nothing wrong. Canada is a police state. pic.twitter.com/JueDxqywY6

“We are not afraid. In fact, every time the government decides to further suspend our civil liberties, our resolve strengthens and the importance of our mission becomes clearer,” Lich said. “We will remain peaceful, but planted on Parliament Hill until the mandates are decisively ended.”

“We want to end this unlawful protest peacefully and safely,” Bell told reporters. “We have a very deliberate plan that will be methodical and take time for us to progress through and completely remove anyone from the core.”

Bell, who replaced former police chief Peter Sloly on Feb. 15, following his resignation, said police from Ontario and Quebec have joined Ottawa officers and they are “absolutely committed” to ending the protest.

“This weekend will look very different than the last three,” he said.

Police are preparing for the fourth straight weekend of demonstrations, as Environment Canada warns of a winter storm in the Ottawa area, with 20–30 centimetres of snow expected by the morning of Feb. 18.

Police said they’ve established a perimeter around the downtown core of Ottawa with over 100 checkpoints to make sure only those working and living in the area, or police and medical emergency services will be allowed in.

Limin Zhou and The Canadian Press contributed to this report.