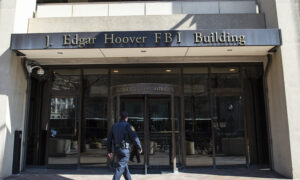 The world needs to wake up to the Chinese Communist Party’s (CCP) bullying and lay down its own rules to deter the regime’s aggressions, the China adviser to former Secretary of State Mike Pompeo says.

Miles Yu, a Chinese-born academic who helped shape the Trump administration’s China policy, called out the CCP’s tactic of threatening the United States, telling it not to interfere in issues deemed to be the regime’s “internal affairs,” including Hong Kong, Tibet, and Xinjiang—which it dubs “red lines.”

“This is [the] Chinese Communist Party’s ‘red line,’ that’s all. It’s not red lines based upon international law,” Yu said in an exclusive interview with The Epoch Times’ “American Thought Leaders” program.

Most recently, the regime’s top diplomat warned the Biden administration that “any trespassing would end up undermining China–U.S. relations and the United States’ own interests.”

When the regime tells countries that the topic of Xinjiang is a “red line,” what it’s really saying, according to Yu, is, “We’re going to lock up a million Uyghurs in concentration camps, we torture them, we suppress their freedom.

“And you, the international community, … are not allowed to say a word in protest. Otherwise you’re not respecting us.”

Yu said, “The world has to wake up to that kind of bullying” and reject such rhetoric.

While the CCP claims that countries wanting to hold it accountable for human rights abuses in Xinjiang are interfering in “domestic sovereignty,” this is not the case, “because at some point you cannot really kill people, commit genocide, in the name of sovereignty,” Yu said.

He urged the international community to instead set its own red lines targeting the CCP’s predations, forcing the regime to adhere to international rules.

Yu believes that the Trump administration has indelibly transformed the United States’ approach on China by recognizing the nature of the challenge posed by the CCP—that is, as the “central threat of our time,” a description often used by the former secretary of state.

Previous administrations, according to Yu, had been “consumed” by how to maintain a “smooth relationship” with the regime based upon a “flawed framework.” That framework was guided by what he called a “missionary sentiment”: the notion that economic engagement with Beijing would lead to China becoming more democratic and a responsible stakeholder in the world.

For Yu, the previous thinking on China was “completely off the wall,” because it failed to understand the nature of the regime that ruled over the Chinese people.

“We in the West, constantly, constantly underestimate the degree to which China is still a Communist Party,” Yu said, adding that the CCP is the most dogmatic Leninist political party in human history.

“Look at their domestic policy. Look at their international policy. Every single major policy move there is motivated by this kind of ideology,” he said, adding that one needs only to read the speeches of CCP leaders to recognize this. Yet, Western policymakers have failed to take it seriously.

“I think that’s the ultimate shortfall of the U.S. foreign policy [prior to the Trump administration],” he said.

Yu, who grew up in China’s western Chongqing city during the Cultural Revolution, was in a unique position to offer this more realist assessment of the regime. He arrived in the United States as an exchange student in 1985. The Tiananmen Square Massacre four years later prompted Yu to become a student advocate for democracy in China.

He went on to study for a doctorate at the University of California, Berkeley, before becoming a professor of modern China and military history at the U.S. Naval Academy in Annapolis, Maryland, in 1994, where he has remained, excluding the last four years on transfer to the State Department.

Yu was at the forefront of the department’s development of China policy. In the last year of Trump’s presidency, Pompeo became the public face of the administration’s tough stance toward Beijing, declaring sanctions and other measures targeting the CCP for its human rights abuses, suppression of freedoms in Hong Kong, military aggression in the South China Sea, and threats posed by Chinese technology.

While he was praised as a “national treasure” by one senior department official, Yu drew particular scorn from the Chinese regime. State media labeled him the number one traitor to the Chinese race in modern history, and the middle school he attended in Chongqing chiseled his name off a wall of honor.

Yu said one of the non-public “crowning achievements” of the Trump administration was that it was able to minimize the “unhealthy influence” of the China lobby, which in many ways is beholden to the CCP.

The CCP has leveraged its exclusive control over market access to influence American companies and groups wanting to operate in China. This applies to Washington lobbyists who “would have to go to the Chinese Communist Party elite, and to get any access to China,” Yu said.

The former adviser rebutted those who criticized the Trump administration of being too unilateral in carrying out its China policies. Biden officials have vowed to work with allies in confronting the regime’s threats, which they say is a point of departure from the previous administration.

Yu said Pompeo spent “most of his time” attempting to foster global awareness of the China challenge and build a coalition to counter it.

“We spent many, many efforts to form that multilateral coalition,” he said. But the administration encountered much resistance from other nations early on.

“Many of our friends and allies didn’t see that way initially,” Yu said, adding that they accused the United States of being unilateral. “But they were the ones [who were] most unilateral, because they didn’t want to go along.”

It was not until after the COVID-19 pandemic that many countries came around to recognizing the global threat, he said.

For instance, the United States convinced NATO to address the China challenge in the Indo-Pacific, Yu said, something that would have been inconceivable a mere three years ago.

At the same time, America must be able to take the lead in confronting the regime, according to Yu.

“When we take the lead, free nations will follow,” he said.

“It’s not because we’re being arrogant. It’s because … we’re the country that has the capability … to stem the Chinese expansion globally.”

Yu expressed that his views above are his own and do not represent those of the U.S. Naval Academy, the Pentagon, or federal government.