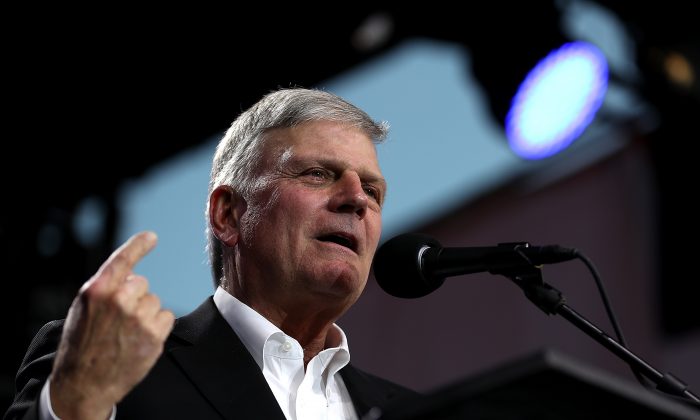 Franklin Graham on Election Claims: Trump ‘Has a Track Record of Being Right’

Evangelist Franklin Graham said Saturday that he tends to believe President Donald Trump’s comments regarding the election being rigged and stolen, given that the president has been right on various issues about the mistreatment he’s been through during his presidency.

“The President has been maligned, falsely accused, and attacked on every front since before the election in 2016. When President Trump says that this election has been rigged or stolen, I tend to believe him. He has a track record of being right,” Graham wrote on his Facebook page.

Graham is the son of the late Rev. Billy Graham, a prominent evangelical Christian figure of international renown.

Graham retrospected on Trump’s experience in the past 4 years. In 2016, when Trump told the American people that the government was spying on him, the media said Trump was paranoid and the Democrats and the Obama administration called it a lie and that Trump is not fit to be president. But later, the American people later found out that the U.S. government had indeed spied on Trump, and that what Trump said is true.

When Trump was under investigation for Russian collusion for 2 years, the president said there was no collusion, but the media and Democrats insisted that there was. Special counsel Robert Mueller’s investigation found no evidence of collusion.

Then, Democrats launched a failed impeachment attempt against Trump.

Graham concluded his post with, “Pray for President Trump, pray for Joe Biden, and pray for our nation—that we will get through this, and for God’s will be done. ”