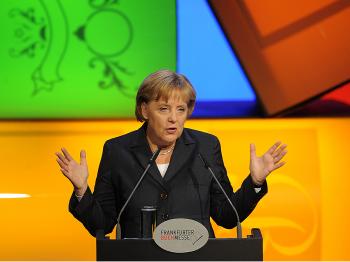 A Tale of Power Struggle at the Frankfurt Book Fair

Heng He
biggersmaller
Print
This year’s Frankfurt Book Fair became notorious for how the Chinese state, as guest of honor, tried to use its influence to silence Chinese dissidents invited to speak at the Fair. The incident showcased for the world how the Chinese Communist Party (CCP) tries to export its intolerance of free speech.

Behind the scenes on the day before the fair opened, another smaller drama took place that has been little remarked upon, but that also reveals a key characteristic of the CCP: Mr. Xi Jinping gave German Chancellor Angela Merkel two books.

Xi is the vice president of the People’s Republic of China and is supposedly the heir to the throne of the CCP regime. His gift consisted of the English versions of Jiang Zemin’s published books: On the Development of China’s Information Technology Industry and Research on Energy Issues in China.

Jiang is the former paramount leader of China who was replaced as head of the CCP by Hu Jintao in 2002. Neither of the books Xi gave Merkel is related to Jiang’s training and work before his involvement in politics. His major at Shanghai Jiaotong University and later in his studies in the Soviet Union was electrical engineering. He is definitely not an expert on IT or energy, and his books have no value in the fields of science and technology.

Chancellor Merkel was elected after Jiang Zemin’s retirement. Now Jiang is only a regular citizen without any title in the Party or the state. There is no personal relationship between him and Merkel. No one could think of a reasonable explanation for this gift.

One month earlier, beyond the expectations of most China experts and analysts, the fourth plenary session of the Seventeenth Central Committee of the Chinese Communist Party did not announce Xi Jinping’s appointment as the Vice Chairman of Central Military Commission. His appointment to this position would have paved the way for him to take over the position of general secretary of the CCP Central Committee at the Eighteenth National Congress of the Party.

Xi Jinping is thought to have been handpicked by Jiang Zemin to be the next generation CCP leader who would represent his interests. Hu Jintao successfully stopped or postponed Jiang’s plan at the fourth plenary session. Jiang used the opportunity of the Frankfurt Book Fair to send a message: Xi Jinping belongs to Jiang’s side, and Jiang still has power and influence in China’s politics.

The so called “Jiang-Hu struggle” seems to have little meaning to outsiders. Unlike the earlier cases of Mao Zedong and Deng Xiaoping, an ideology-based power struggle is no longer the driving force of the CCP’s revolution. There are different interest groups at the center of power. But regarding ideology or economic interests, there are fewer conflicts and differences than people think. There is only one exception to the general similarities between the groups, which is easily ignored.

In communist China’s political circles, the way the top leader handpicks the successor is not based on who is the best person for the job, but who is the person least likely to turn against the leader’s most important political legacy. Mao Zedong picked Hua Guofeng only because Hua would never denigrate the Cultural Revolution, which is one of the two events that Mao considered his own legacy. The other one was forcing Chiang Kai-shek’s Nationalists to Taiwan. Not long before he died, Mao wrote of Hua Guofeng, “With you in charge, my heart is at ease.”

Right before the Tiananmen Square massacre on June 4, 1989, Jiang Zemin was selected to be the new leader of the CCP and flew to Beijing. It surprised the world as well as Jiang himself. Jiang had been almost the only local leader to have suppressed the democracy movement without instructions from above, acting only on his own nature and instinct. Anyone could follow the path of Deng’s economic reform, but only Jiang wouldn’t turn against what Deng did on Tiananmen Square.

Deng knew, when the economic reforms had developed to a certain degree, nobody could turn them around, not even Jiang Zemin. But keeping Jiang in his position would make Deng free of worries for at least the next 10 years.

Jiang Zemin faced a more complicated situation than Deng. His successor, Hu Jintao, was not selected by him but was appointed by Deng Xiaoping. What is Jiang’s legacy? Economic reform belongs to Deng Xiaoping. Nobody really thinks the theory Jiang drafted, the “Three Represents,” is worth anything. Only one thing is definitely his and only his, the persecution of Falun Gong, which started in 1999.

Jiang had to make sure that, even if he is no longer at the center of power, nobody would be able to change that policy or convict him for his crimes. When he was still in power, he tried to make the Party officials involved in the persecution. With everyone’s hands bloody, he would be safe. Before his retirement, he managed to keep enough votes in the Politburo to keep the persecution going.

Even though the persecution hasn’t stopped, he still can’t trust Hu and Hu’s potential successor. He needs to put someone at the top, someone who owes him a big favor and would not turn against him on this issue.

The reasonable explanation usually is the simplest one. To avoid punishment is the key to power struggles inside the Chinese regime.