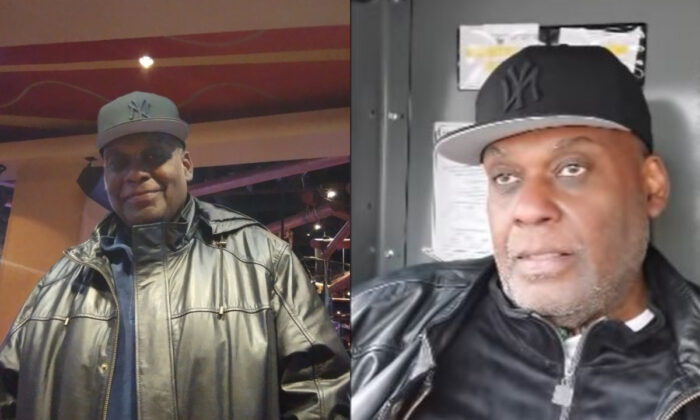 The suspect in the New York subway shooting was arrested on April 13 and charged with terrorism.

Frank James, 62, was stopped at 1:42 p.m. at the corner of St. Mark’s Place and First Avenue in Manhattan by New York police officers.

“My fellow New Yorkers, we got him,” New York Mayor Eric Adams said.

James was taken into custody without incident.

He has already been charged with violating a federal law that prohibits terrorist attacks and other violence against mass transportation systems, and he’ll face additional counts, according to Breon Peace, U.S. attorney for the Eastern District of New York.

A man authorities say is James donned a gas mask on the morning of April 12 and opened two canisters that filled a Manhattan-bound “N” train with smoke before opening fire as a train pulled into the 36th Street Station in Brooklyn.

Shots can be heard in video footage taken by witnesses that also shows people fleeing the train.

James exited the subway from a station that’s one station away from the scene of the shooting, according to an affidavit in support of an arrest warrant. He was on the loose for approximately 29 hours.

James traveled from Wisconsin to Philadelphia, where he rented an apartment and had a storage unit, according to videos on his YouTube page and law enforcement officials.

James has a lengthy criminal record, including nine arrests in New York and three in New Jersey. But he was never convicted of a felony, which enabled him to legally obtain a gun, James Essig, a New York Police Department (NYPD) official, told reporters.

Records from U-Haul show that James rented a vehicle in Philadelphia. Surveillance cameras captured the vehicle being driven into New York just hours before the attack. One camera showed him walking on foot away from the van near a subway station, while footage released by the NYPD showed him entering the station through a turnstile.

The van was recovered in Brooklyn, as was the key to the vehicle.

Detectives at the crime scene also recovered a 9-millimeter semi-automatic handgun, magazines, a hatchet, a liquid believed to be gasoline, a bag with consumer-grade fireworks, and a hobby fuse.

James listed Lucent Technologies, an information technology consulting firm, as his place of employment. The company didn’t respond to a request for comment.

Authorities confirmed that James was the owner of a YouTube account, where he posted dozens of videos that have been removed by the technology company.

In the videos, James, a black male, ranted about police shootings of black people and repeatedly used racial epithets against white and Hispanic people, according to an Epoch Times review.

In a linked Facebook account, James called former President Donald Trump and his supporters racist and repeatedly posted violent images and memes, including one that said, “You may not be able to beat em but you can sure as hell shoot em.”

James also criticized Adams and New York Gov. Kathy Hochul, both Democrats, taking particular aim at their recent announcement on trying to help the mentally ill in the city and state of New York.

In one of his videos, James described having a “crisis of mental health” in the past and launched into an expletive-riddled screed against people he said he dealt with who work in the mental health system.

“Mr. Mayor, let me say to you, I’m a victim of your mental health program,” he said at one point.

Adams told MSNBC on April 13 that he wasn’t sure what James was talking about.

“But it’s clear that this individual wanted to create terror and violence,” he said.

Police officials have briefed the mayor on the social media posts, which saw James express support for the Black Lives Matter movement and black nationalists such as Assata Shakur, who killed a New Jersey state trooper in 1973 and later fled to Cuba.

James also launched a rant in a video, “[expletive] BLM,” where he criticized the movement and offered his views on topical subjects such as nuclear war, the Russia–Ukraine conflict, and traffic in Chicago.

“As I leave the state of Wisconsin, about to be back in the state of Illinois, all I can say is good riddance, and I will never be back again alive,” he said.