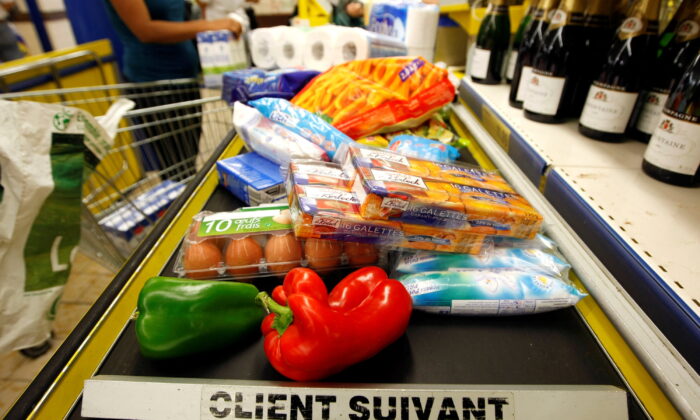 A customer pays for shopping at the cash register in a discount supermarket in Nice, southern France, on Oct. 16, 2008. (Eric Gaillard/Reuters)
Economy

PARIS—France will give food companies up to six months to change product labels to reflect recipe changes if they replace sunflower oil, supplies of which have been strained by the war in top exporter Ukraine, the economy ministry said on Tuesday.

Ukraine usually accounts for about half of global exports of sunflower oil, one of the world’s most consumed edible oils, and Russia’s two-month-old invasion of its neighbour has stalled Ukrainian shipments.

As the food industry moves to replace sunflower with alternatives like rapeseed, soybean or palm oil, companies can request a temporary waiver on French labelling rules, the ministry’s consumer protection and anti-fraud authority said.

Food makers would nonetheless have to provide a basic indication of an ingredient change on packaging within two months, before providing a fully updated ingredient list within six months, the DGCCRF body said.

Recipe changes that imply an allergy risk, or that compromise a product claim such as being organic or free from palm oil, would not benefit from the labelling grace period, it added.

Sunflower oil is widely used in preparing potato fries and crisps, as well as in other food products like margarine and biscuits.

It is also sold in bottles as cooking oil and a rush by households to secure supply has led to empty store shelves in France and other European countries, with some supermarket chains restricting purchases per shopper.

All-time peaks for vegetable oil prices this year have contributed to global food prices as measures by the U.N. reaching their highest on record.

Vegetable oil supplies could come under further strain as top palm oil producer Indonesia prepares to ban exports of a type of palm oil in a bid to rein in domestic prices.