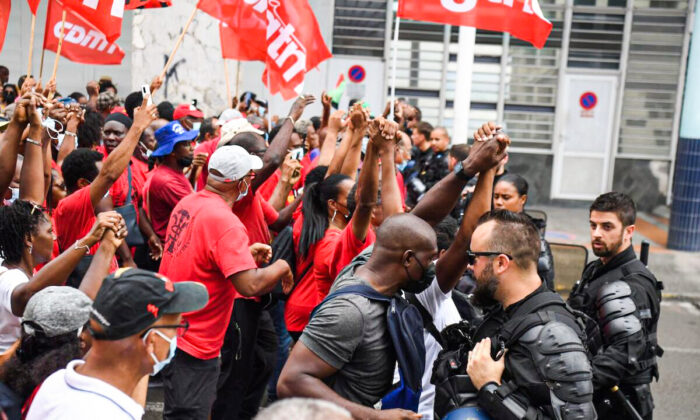 Protesters take part in a demonstration against compulsory Covid-19 vaccinations in front of the Prefecture of Martinique in Fort-de-France, on the French Caribbean island of Martinique, on Nov. 30, 2021. (Alain Jocard/AFP via Getty Images)
Europe

The French government has deployed military police to the Caribbean islands of Martinique and Guadeloupe amid intensifying protests against COVID-19 vaccine mandates and other pandemic related restrictions.

Following several weeks of unrest and violent protests over COVID-19 measures—including a vaccine mandate for health care workers—police reinforcements were sent to the French Caribbean territories on Tuesday.

Compulsory vaccinations for health workers, a measure already introduced on the French mainland, had fuelled resentment among the islands’ population.

Sebastien Lecornu, the minister for France’s overseas territories, said 70 gendarmes had arrived in Martinique earlier in the day, in addition to two squadrons that were deployed from metropolitan France unannounced, to help clear road blocks.

“Social dialogue is not possible without a sound basis and that sound basis is the re-establishment of freedoms … and our capacity to re-establish order,” Lecornu told a press conference in Martinique after meeting its leaders and trade unions.

In Guadeloupe, home to some 400,000 residents, 70 police reinforcements were sent on Tuesday along with 10 extra SWAT team members to help shore up security, Lecornu said.

There is a historic mistrust of the government’s handling of health crises in Guadeloupe after many people were systematically exposed to toxic pesticides used in banana plantations in the 1970s. Protesters have insisted they should be allowed to make their own choices about health treatment.

Protests have continued although Paris last week said it would postpone a COVID-19 vaccine mandate for public sector workers amid the widespread protests.

The vaccine mandate and other COVID-19 restrictions fanned long-standing grievances over living standards and the relationship between France’s Caribbean islands and Paris.

French President Emmanuel Macron has described the ongoing unrest as an “explosive” situation.

More than three dozen protesters have been detained over the past week in Guadeloupe, while numerous reports have emerged of looting and individuals erecting street barricades to slow traffic.

The situation remains “very difficult” in Guadeloupe, Interior Minister Gerald Darmanin told France Inter radio on Tuesday. “There are still scenes of extreme violence with police forces being shot at with real ammunition,” he added.

In Martinique, an island of 375,000 some protesters reportedly shot at police officers and firefighters, according to Agence France-Presse. Local authorities said one police officer was seriously injured and needed surgery.