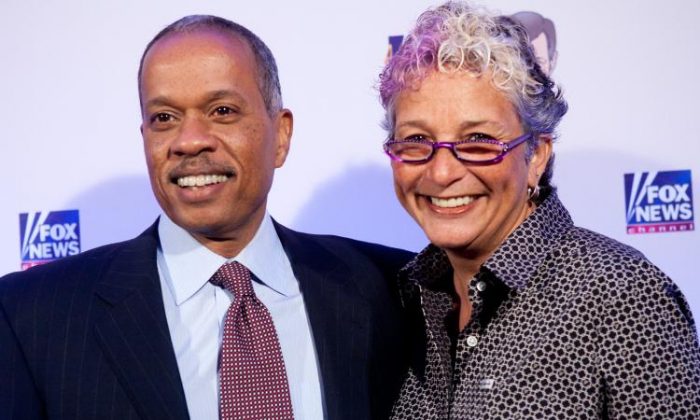 Juan Williams poses with his wife on the red carpet upon arrival at a salute to Fox News Channel's Brit Hume on Jan. 8, 2009 in Washington, DC. (Brendan Hoffman/Getty Images)
Viewpoints

On a May 13 episode of Fox News’s “The Five,” political analyst Juan Williams claimed that Zionists couldn’t be trusted to objectively criticize Rep. Rashida Tlaib (D-Mich.) regarding her recent comments about the Holocaust.

In the segment, responding to comments by Lisa Boothe about the Zionist Organization of America’s previous criticism of Tlaib, Williams stated, “You want to put it in a box and say, ‘Oh, everybody is this way or that way.’ And you are with the Zionists and the Zionists [interrupted] … I’m trying to say, you can’t trust the Zionists to go after Tlaib.”

By way of a reminder, during her “Opening Statement” segment on March 9, Pirro made the following comment about Omar, stating: “Omar wears the hijab, which, according to the Quran 33:59, tells women to cover so they won’t get molested. Is her adherence to this Islamic doctrine indicative of her adherence to Sharia law, which in itself is antithetical to the United States Constitution?”

Shortly thereafter, Fox News issued a statement condemning Pirro’s comment and subsequently suspended her. However, to date, the network has taken no corrective action in light of Williams’s recent comments.

The network’s silence is inexplicable. Williams’s comments were inexcusable and implied that Zionists are unable to objectively evaluate Tlaib’s comments because they are inherently biased against her, by virtue of being Jewish.

In other words, Williams appears to be saying that Zionists shouldn’t have a voice with regard to Tlaib because they are all against her by virtue of being Jewish (this is false) and that the Holocaust hits “too close to home” for Zionists, thereby impacting their ability to be objective.

Williams’s comments are insulting, misguided, and offensive to all Jews, regardless of political affiliation.

Tragically, Jews, among others, are in the unfortunate, yet ideal, position to critique the nature of Tlaib’s comments. Six million Jews were slaughtered at the hands of the Nazis in World War II. Further back in history, it was the Jews whom Persian Empire official Haman threatened to annihilate—now remembered with the holiday Purim. It was the Jews who were enslaved by Pharaoh and the Egyptians—now remembered with the holiday Passover. In recent times, it was innocent Jews who were shot and killed while praying in Pittsburgh and in Poway, California.

Given the continued and tragic persecution of Jews, they must continue to critique and analyze comments such as Tlaib’s to ensure, to the extent possible, that history doesn’t repeat itself. It’s for this reason that Jews read the Haggadah every Passover. According to Chabad, there is a deeper meaning to this ritual:

When Fox suspended Pirro, many people were upset with the decision. However, in doing so, Fox somewhat defined the scope and nature of what is permissible or impermissible to say on air. Williams’s comments were offensive, foolish, and—arguably—anti-Semitic. As such, the network must take some sort of corrective action against Williams. At the very least, Williams should issue a public apology.

Many Jews lost family members or other loved ones as a result of anti-Semitism. Sadly, history has taught many Jews (and non-Jews) how to recognize the warning signs of anti-Semitism. Moreover, many Jews have lived through one or more of these tragic events and are all too familiar with the consequences associated with silence or inaction.

They should not, and will not, sit idly by and allow history to repeat itself.