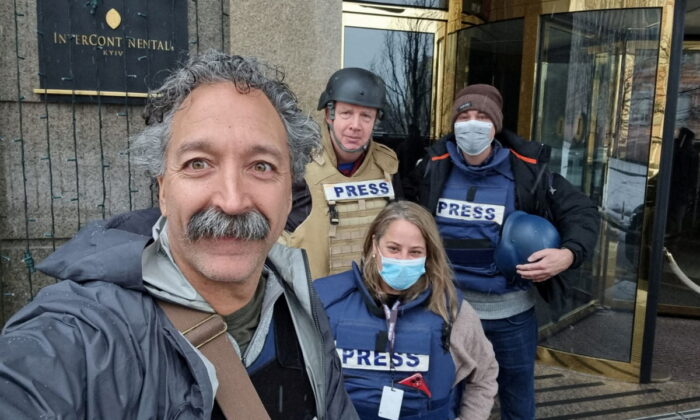 A Fox News photojournalist, Pierre Zakrzewski, was killed in Ukraine on Monday when the vehicle he was in was hit by oncoming fire, the network said Tuesday.

Correspondent Benjamin Hall, who was with him in the vehicle, was injured and remains hospitalized after the incident, Fox said. It’s not clear who fired on the vehicle.

“Pierre was a war zone photographer who covered nearly every international story for Fox News from Iraq to Afghanistan yo Syria during his long tenure with us,” Fox News Media CEO Suzanne Scott said in a statement on Tuesday, adding that he was working in Ukraine since February and was based in London.

“We extend our deepest condolences to Pierre’s wife Michelle and family—please keep them all in your prayers,” Scott added in the statement, adding that Zakrzewski was “widely popular” and “everyone in the media industry who has covered a foreign story knew and respected Pierre.”

“I worked with Pierre many times around the world. He was an absolute treasure,” Fox News anchor John Roberts wrote on Twitter Tuesday. “Sending our most heartfelt prayers to Pierre’s wife and family.”

CNN international reporter Clarissa Ward wrote that “I had the great privilege of working with Pierre and the even greater privilege of calling him a friend,” adding that he was an “extraordinary spirit and tremendous talent and one of the kindest, most gracious colleagues on the road. Absolutely heartbreaking.”

Ukraine Prosecutor-General Irina Venediktova suggested Monday the attack that Russian forces likely fired on the Fox News team. They were not at a Ukrainian military facility when the incident occurred in a Kyiv, suburb, Venediktova said.

Anton Gerashchenko, an adviser to Ukraine’s interior minister, wrote on Telegram on Monday that Hall is in serious condition. The news crew probably “came under mortar or artillery fire” from Russian forces, he said.

No updates were provided on Hall’s condition on Tuesday by Ukrainian officials. The statement from Scott also did not say whether his condition improved or worsened, only that he remains hospitalized.

Other details about the incident were not clear. Russian officials have not made any public comments after Fox News’ statement.

The State Department Correspondents’ Association said that its press corps was “horrified” to hear that Hall was injured. “We know Ben for his warmth, good humor, and utmost professionalism. We wish Ben a quick recovery,” it said.

On Sunday, former New York Times employee and filmmaker Brent Renaud was killed, and another journalist, Juan Arredondo, was injured near Kyiv. Ukrainian officials said they were attacked by Russian forces.