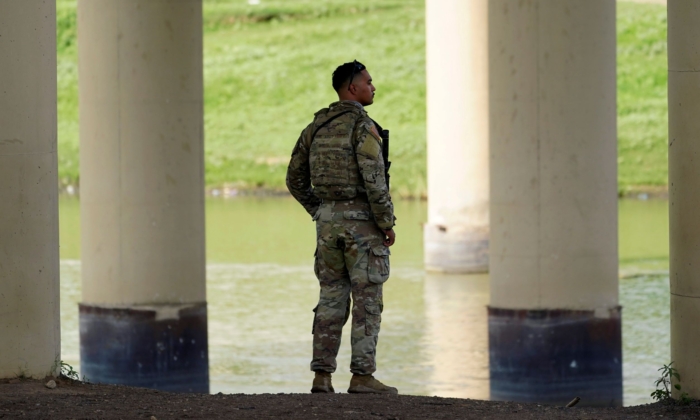 A member of the Texas National Guard looks across the Rio Grande to Mexico from the United States at Eagle Pass, Texas, on Aug. 26, 2022. (Eric Gay/AP Photo)
By Alice Giordano

According to the office of New Hampshire Gov. Chris Sununu, the four states are sending a total of about 500 soldiers to help secure the border. The units will act under the command of the 941st Military Police Battalion, which already has 44 soldiers in place.

An additional 120 soldiers from the 237th Military Police Company will be deployed to set up surveillance sites along the border to block the laundering of drugs, weapons, and money into the United States by Mexican cartels, according to the governor’s statement.

The units will cover a 250-mile stretch where illegal immigrants have been flooding into the United States.

Lt. Col. Carla Raisler, director of public affairs for the Kentucky National Guard, told The Epoch Times that she was surprised Sununu released specific details about the deployment.

“Due to the security concerns of where the soldiers are inside the U.S. border, we don’t generally release information about the units or the size or their movements for security reasons to keep them and their families safe,” Raisler said.

In echoing Raisler’s position, Maj. Jarred Rickey of the Rhode Island National Guard told The Epoch Times that he could only confirm that the state is under a recent federal command to deploy National Guard units to the southwest border. He emphasized that it was only a support mission and not part of Operation Lone Star, which was implemented by Republican Texas Gov. Greg Abbott last year.

Lt. Col. Brad Leighton, public affairs officer for the Illinois National Guard, told The Epoch Times that a transportation company was being sent as part of a routine rotation to replace a National Guard unit that has been in place for several months. It will be withdrawing its aviation detachment this month because it’s done with its mission at the border, according to Leighton.

Leighton said he couldn’t talk too much about the mission but did say it was specifically to assist Border Patrol with surveillance.

In August, Illinois Gov. J.B. Pritzker issued a proclamation about what he called “asylum-seekers,” declaring the state “a disaster area” based on busloads of immigrants from Central and South America arriving from Texas.

Pritzker, a Democrat, said he had declared a state of emergency in the interest of aiding the people of Illinois and the local governments responsible for ensuring public health, safety, and welfare in the wake of the influx of “asylum-seekers” in Illinois.

In his statement about the New Hampshire guardsmen being deployed, Sununu called the border situation “an ongoing humanitarian crisis.”

While he didn’t elaborate in the statement about the reasons for sending National Guard troops to the border, last week Sununu expressed support for Florida Republican Gov. Ron DeSantis’s move in September to send 50 illegal border crossers to Martha’s Vineyard. It was a move that set off a hailstorm of criticism against DeSantis, with Democrats calling for his arrest for human trafficking.

Sununu, a Republican, called the New Hampshire guardsmen answering the call to the border “heroic men and women.”

“They answered the call to serve during the COVID pandemic, and are now answering our nation’s call—deploying to the ongoing humanitarian crisis along our southern border,” he said.

According to Sununu, the two New Hampshire National Guard units will remain in place at the U.S.–Mexico border for a year.

The announcement of the deployment comes just weeks after Abbott announced he was reducing the National Guard soldiers he had in place at the southern border to 5,000 from 10,000.

Correction: A previous version of this article incorrectly described the status of the Illinois aviation detachment. The Epoch Times regrets the error.