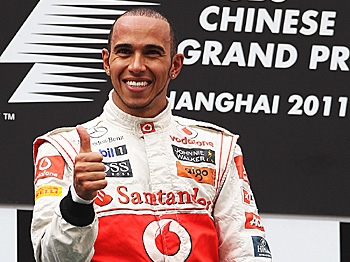 "I am absolutely overwhelmed,” the McLaren driver told the post-race press conference on SPEED TV. “It’s been a long, long time—it feels like a long, long time–since since I was sitting here and I feel very proud and extremely grateful for the hard work everyone’s put in.”

Had Vettel won the race, he might have gained an insurmountable lead in the Drivers’ Championship. When asked, Hamilton was cautiously optimistic about his, and McLaren’s championship chances.

”We still have a long road ahead of us but we are working very hard to close the gap,” he said. “In the race we are quite similar, but in qualifying we’ve still got a lot of work to do.

“These guys did a fantastic job and I am looking forward to many, many more great races like this.”

Hamilton nearly didn’t make the starting grid. His car sprung a dangerous fuel leak just before the race; his mechanics were able to repair it with 30 seconds to spare, but had to finish attaching the bodywork on the grid.

"“Before the start, I was sat in the car and thinking, ‘Okay, let’s go,’ but the car wouldn’t start. I didn’t question what was going on, I just wanted to stay calm and not add to everyone’s stress," Hamilton explained. "When I finally left the garage, I drove down the pitlane watching the light and hoped it wouldn’t turn red – and it didn’t! It’s never been that close before…"

Hamilton and his teammate Jenson Button both passed Vettel at the start—a rare bad one from the Red Bull driver—but Vettel re-passed Hamilton on lap 11, just before his pit stop. Hamilton didn’t see Vettel again until lap 44. Then he patiently waited for Vettel’s tires decay. Hamilton made a couple of good attempts at the Red Bull driver, before finally catching Vettel by surprise with a pass in Turn Seven. Once past, the McLaren driver opened a five-second gap by the end of the race.

“At the end, it was tough to get past Sebastian–even though he was getting slower, he never looked like getting out of shape," Hamilton said.

"It was always going to be difficult to follow him onto the back straight, so I wanted to get him before then–I wasn’t expecting to overtake where I did, but I had the grip to keep ahead, and I made it stick."

Sebastian Vettel tried a two-stop strategy, hoping one less stop would give him enough lead on track to hold off cars with fresher tires. Vettel passed Hamilton on lap 11, just before heading to the pits, then took the lead on lap 25 when the leaders pitted for their second stop.

Vettel held the lead until he pitted again on lap 31, then retook it on lap 37 when the leaders pitted again. Vettel couldn’t open a big enough gap to protect him from Hamilton, whose tires were seven laps fresher

Drive of the race goes to Red Bull’s Mark Webber, who started in 18th and finished third—without the aid of KERS.

Webber had bad luck, and made bad tires choices, in qualifying, but he turned that to his advantage in the race. Webber started on Primes, then used his extra options from qualifying give him an edge over the rest of the field which started on Options and had to finish on Primes.

Webber didn’t gain 15 positions just on tire strategy. He also made a series of courageous and determined passing moves, fighting his way past such experienced opponents as Michael Schumacher, Fernando Alonso and Jenson Button.

Webber did all this without the aid of KERS—he radioed that his KERS unit had broken on lap 24. Regardless, he cut his way through the field, earning himself a podium finish and giving Red Bull a huge lead in Constructors’ points.

Jenson held on to fourth place, ahead of Nico Rosberg, and the Ferraris of Felipe Massa and Fernando Alonso. Michael Schumacher finished eighth, only half-a-second behind Alonso.

24 cars started the race, and 23 took the checkered flag. Only Jaime Alguersuari’s Toro Rosso failed to finish; his crew failed to tighten his right rear wheel nut and the wheel came off after he left the pits on lap 9.

Formula One heads for Byzantium next: the 2011 Turkish Grand Prix, 58 laps of the 5.33-km, 14-turn Istanbul park circuit, starts at 3 p.m. local time on May 8. Tickets and travel packages are available through the official Formula 1 website.