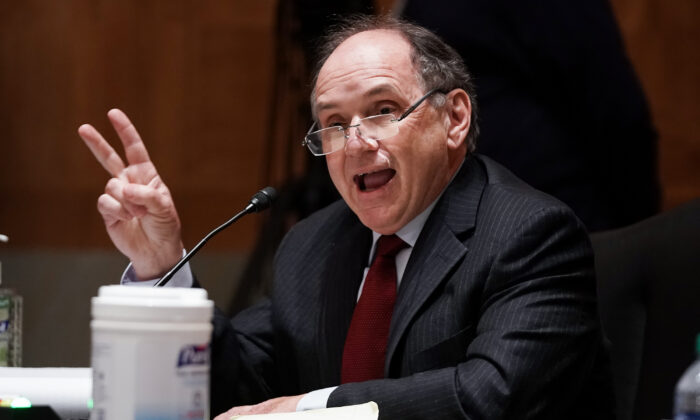 Trump campaign attorney James Troupis gestures as he gives an opening statement during a hearing to discuss election security and the 2020 election process in Washington, on Dec. 16, 2020. (Greg Nash/POOL/AFP via Getty Images)
2020 Election

A former judge from Wisconsin, who is now representing the Trump campaign in the state, told lawmakers that he believes intimidation by the left has prevented lawyers and judges from accepting and hearing election fraud cases.

“We have to acknowledge that the court system has been deeply intimidated by the left, just as the lawyers have been intimidated,” James Troupis told the U.S. Senate Homeland Security and Governmental Affairs Committee on Dec. 16. “And that’s a sad, sad state of affairs.”

The committee was conducting a hearing to explore voting “irregularities” from the 2020 general election. During the hearing, witnesses testified about a litany of alleged instances of election fraud occurring in multiple contested states.

Their claims are backed up by mounting evidence from witnesses, whistleblowers, and data experts that have emerged in recent weeks, alleging that a proportion of ballots cast and counted in these battleground states were done so under irregular and fraudulent circumstances. Much of the evidence was presented through affidavits in the lawsuits filed by the Trump campaign or third parties, and through state legislature hearings hosted by Republicans.

During the Senate hearing, Troupis, one of the witnesses, explained why he decided to represent the campaign in its effort to challenge election results when many lawyers refused. He said that he believes many prominent law firms didn’t want to participate in the lawsuits because of fear of retaliation by the left.

“One of the reasons I was called because virtually every major law firm in this country and in this city refused to represent the president. Not because of the lack of merit in his claims—we’ve certainly demonstrated that there’s merit—but because of the cancel culture,” Troupis said.

“Because of the environment that has been created by the left that has intimidated lawyers so that they can’t be here. They’re not here, from the giant law firms, precisely because they were ordered by their management committees and others that, ‘You cannot take those cases. The reasons you cannot take those cases is because our clients, or the Democrat party, or the incoming administration will remember that and they will hold it against you.’

“As a former judge, I was so incensed by that.”

This comes as other lawyers representing the president and his campaign have revealed that they have been harassed or threatened following their decision to take up election cases.

One of the lawyers, Linda Kern, who has since withdrawn from a Pennsylvania case, had to be placed under official protection after receiving “threats of harm.” Kern revealed in November that she was “subjected to continuous harassment in the form of abusive emails, phone calls, physical and economic threats, and even accusations of treason—all for representing the President of the United States’ campaign in this litigation.”

Kern said that some of the harassment came from a lawyer from an opposing firm—Kirkland & Ellis, which is representing defendants in the election case—who left a minute-long voicemail that “falls afoul of the standards of professional conduct.” Another Kirkland lawyer defended his firm, saying that the call was “discourteous and not appropriate” but disagreed with Kern’s characterization. The firm eventually withdrew from the case.

Despite the difficulties, many Trump campaign lawyers and attorneys from third-party lawsuits are pushing forward with their legal challenges, seeking to invalidate certain ballots until concerns over potential fraud are transparently and independently addressed.

However, many of these cases have been tossed out by judges for procedural reasons, such as lack of standing to bring a case; lack of jurisdiction to sue; mootness, where there is no longer a controversy between the parties; and laches, where a judge ruled there was a lack of diligence in bringing a claim. Other judges weren’t convinced by the allegations presented.

Ellis told The Epoch Times’ “American Thought Leaders” program in a recent interview that the “fight is not over” and that the president has until January to continue with legal challenges.