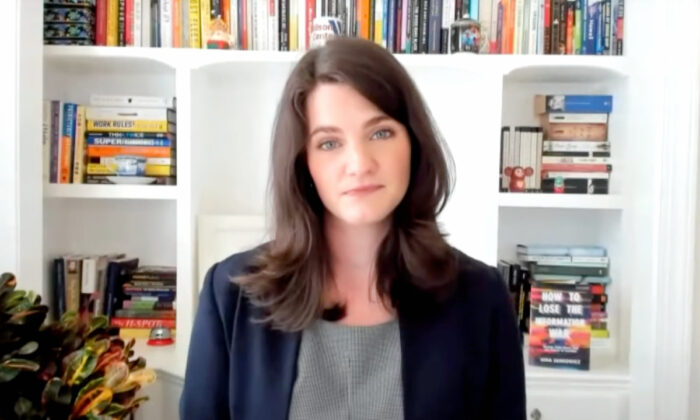 Nina Jankowicz, who briefly served as the Biden administration’s “disinformation czar,” has registered as a foreign agent of a nonprofit organization based in the United Kingdom.

According to registration documents received by the U.S. Department of Justice’s (DOJ) Foreign Agents Registration Act (FARA) unit, Jankowicz filed for her foreign agent status this month (pdf). The name of the foreign principal is listed as the Centre for Information Resilience (CIR) from the United Kingdom. The nonprofit is founded and directed by Adam Rutland, a UK citizen, and Ross Burley, a dual UK–U.S. national.

The entity is financed by a “foreign government, foreign political party, or other foreign principal,” the documents show. It receives grants from the UK government, including the Foreign, Commonwealth, and Development offices.

According to its website, CIR “is an independent, non-profit social enterprise dedicated to countering disinformation, exposing human rights abuses, and combating online behavior harmful to women and minorities.”

At CIR, Jankowicz is tasked with supervising research, executing business strategy, overseeing the establishment of CIR’s research, communicating with the media, and briefing individuals and officials on the organization’s research, according to her registration documents.

She will work with CIR employees from the UK via online communication platforms in order to “further the goals” of the organization.

Jankowicz also documented that in the 60 days prior to the obligation to register for the foreign principal, she received money for promoting the interests of the organization. She cited two payments in excess of $12,000 each made in October and November with the purpose stated as “remuneration for services rendered.”

Jankowicz was selected to lead the Disinformation Governance Board under the U.S. Department of Homeland Security in April 2022. At the time, the Biden administration had portrayed Jankowicz as an expert in online disinformation.

Her appointment instantly drew criticism, with reports showing that Jankowicz had made posts on Twitter trying to whitewash the Hunter Biden scandal as disinformation.

She also made posts in support of the discredited “Steele dossier” that was used to smear former President Donald Trump by insisting he had ties with the Russian government.

Jankowicz submitted her resignation in May and the Disinformation Governance Board was disbanded in August.

Burley, the co-founder of Jankowicz’s new company, has worked in the UK Government’s Stabilisation Unit since 2017, according to his LinkedIn profile, and spent almost three years in senior positions at Zinc Network, a communications contractor linked to the UK Home and Foreign offices, whose activities are kept secret from the public under the country’s Official Secrets Act.