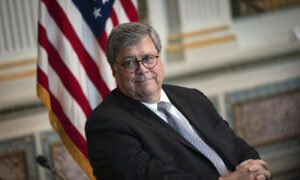 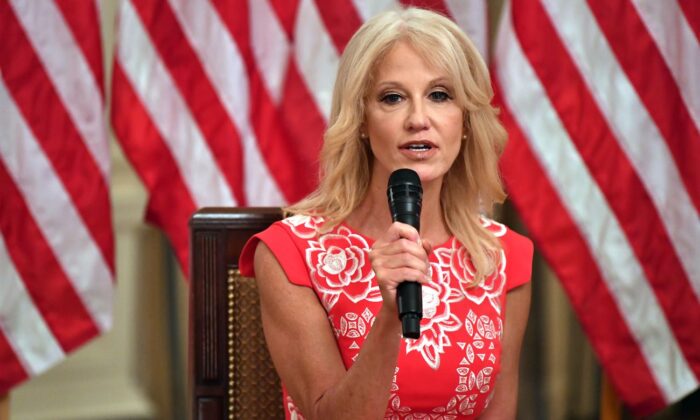 Counselor to the President Kellyanne Conway speaks during the "Getting America's Children Safely Back to School" event at the white House in Washington, on Aug. 12, 2020. (Nicholas Kamm/AFP via Getty Images)
High-profile cases

Conway announced on Twitter late Friday she was diagnosed with COVID-19, the disease caused by the CCP (Chinese Communist Party) virus, a novel coronavirus that emerged from Wuhan, China, in late 2019.

“Tonight I tested positive for COVID-19. My symptoms are mild (light cough) and I’m feeling fine. I have begun a quarantine process in consultation with physicians,” she wrote. “As always, my heart is with everyone affected by this global pandemic.”

Her diagnosis comes days after she attended a White House event at the Rose Garden on Sept. 26 where President Donald Trump announced his nomination of Judge Amy Coney Barrett to the Supreme Court.

A number of those who were present at the event have also since tested positive to the CCP virus.

Also in attendance at the White House event was Republican National Committee Chair Ronna McDaniel, who has also tested positive for COVID-19. A spokesperson for McDaniel said on Friday that she has been at her home in Michigan since Sept. 26.

Two members of the Senate Judiciary Committee announced on Friday they tested positive for the virus—Sen. Mike Lee (R-Utah) and Sen. Thom Tillis (R-N.C.). Both were also present at the White House event. Both said they will quarantine for 10 days—ending just before Barrett’s confirmation hearings begin on Oct. 12.

The president of the University of Notre Dame, Rev. John Jenkins, announced on Friday that he tested positive for the virus. He was in quarantine on Sept. 28, reported The Associated Press.

Others present at the Sept. 26 event have tested negative to the CCP virus on Friday, including Barrett and Attorney General William Barr.

The Centers for Disease Control and Prevention (CDC) guidelines recommends a quarantine period of 14 days for those who had been in close contact with a confirmed COVID-19 case because symptoms may appear 2 to 14 days after exposure to the virus.

Trump’s physician, Dr. Sean P. Conley, said on Friday that the president “remains fatigued but in good spirits” and the first lady has “only a mild cough and headache.”

The president has taken a single 8-gram dose of Regeneron’s polyclonal antibody cocktail, and has been taking zinc, vitamin D, famotidine, melatonin, and a daily aspirin, Conley said.

Trump was later hospitalized at Walter Reed National Military Medical Center “out of an abundance of caution” and will work there for days, the White House said.

Press secretary Kayleigh McEnany said in a statement: “President Trump remains in good spirits, has mild symptoms, and has been working throughout the day. Out of an abundance of caution, and at the recommendation of his physician and medical experts, the president will be working from the presidential offices at Walter Reed for the next few days. President Trump appreciates the outpouring of support for both he and the first lady.”

The Trump campaign announced that previously-scheduled campaign events involving the president are either being moved to virtual events, or are being temporarily postponed.

“Previously announced events involving members of the First Family are also being temporarily postponed,” campaign manager Bill Stepien said in a statement, adding that other campaign events will be considered on a case-by-case basis.

Other world leaders such as British Prime Minister Boris Johnson and Brazilian President Jair Bolsonaro have also tested positive for the CCP virus earlier this year.