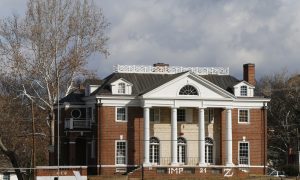 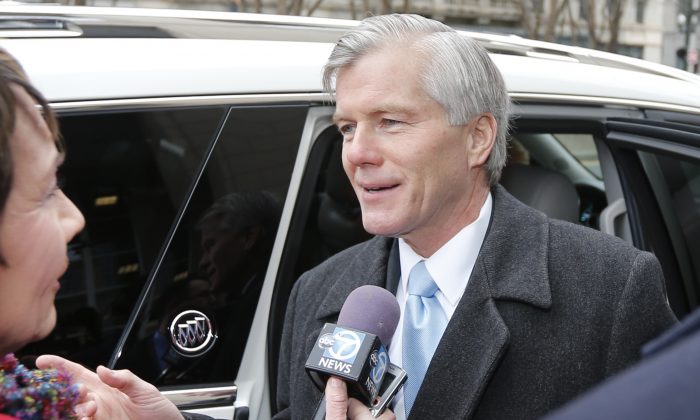 Former Virginia Gov. Bob McDonnell arrives at federal court for sentencing in Richmond, Va., Tuesday, Jan. 6, 2015. McDonnell, once a top Republican prospect for national office, was convicted for selling the influence of his office to the CEO of a dietary supplements company. (AP Photo/Steve Helber)
US

RICHMOND, Va.—Former Virginia Gov. Bob McDonnell on Thursday asked a federal appeals court to allow him to remain free while he appeals his public corruption convictions to the U.S. Supreme Court.

McDonnell filed the motion two days after the 4th U.S. Circuit Court of Appeals refused to reconsider a three-judge panel’s unanimous decision upholding his convictions. McDonnell’s lawyers asked the court to clarify that its previous order allowing him to remain free pending appeal will remain in force.

“After all, he remains neither a flight risk nor a threat to public safety, and the questions presented by his case remain ‘substantial,’ notwithstanding that a panel of this Court has rejected them,” the lawyers wrote.

McDonnell’s attorneys said in the filing that prosecutors indicated they will oppose the motion, and the court gave them until 5 p.m. Friday to respond.

A jury in September found McDonnell and his wife, Maureen, guilty of doing favors for wealthy vitamin executive Jonnie Williams in exchange for more than $165,000 in gifts and loans. Bob McDonnell was sentenced to two years in prison, his wife to one year and one day.

In Thursday’s filing, lawyers argued that McDonnell would suffer “irreparable harm” if he serves the bulk of his prison term and his convictions are ultimately overturned by the Supreme Court. Conversely, the government would not be harmed if the sentence is postponed and the Supreme Court denies review, they argued.

The former Republican governor, once widely considered a possible running mate for presidential candidate Mitt Romney, was convicted of 11 counts and was sentenced to two years in prison. His wife was sentenced to one year and one day on eight counts. Both have been free while they pursue separate appeals.

According to trial testimony, Williams showered the McDonnells with lavish gifts — including a Rolex watch for the governor, about $20,000 in designer clothing for the first lady and $15,000 to pay for catering at a daughter’s wedding — while the former Star Scientific Inc. president sought state university research on his company’s signature product. He also loaned the McDonnells thousands of dollars on exceptionally favorable terms to help them pay off debt and keep their money-losing Virginia Beach vacation rental properties afloat.

Meanwhile, the McDonnells attended promotional events and hosted a product launch event for Anatabloc, the tobacco-derived anti-inflammatory manufactured by Williams’ company. Bob McDonnell also arranged meetings with administration officials for Williams, who wanted not only the university research but also inclusion of Anatabloc in the state’s employee health plan.

The former governor has insisted that he provided nothing more than routine political courtesies and access to Williams and that he was convicted under an overly broad definition of bribery.

McDonnell’s lawyers said in their latest motion that there is a “reasonable probability” that the Supreme Court will review the case because other judicial circuits have adopted a narrower definition of what constitutes an “official act” under federal bribery law.