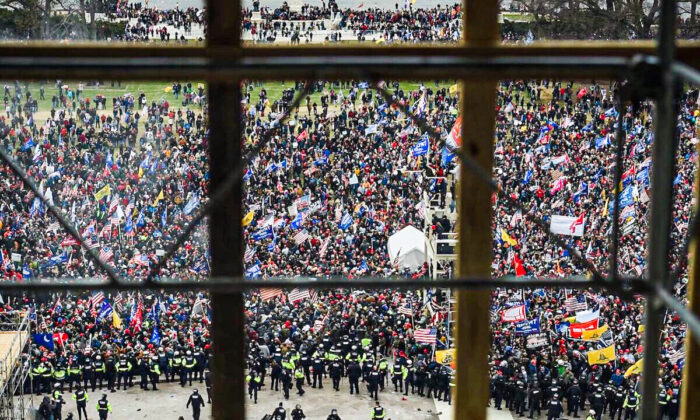 Police and protesters outside the U.S. Capitol's Rotunda in Washington on Jan. 6, 2021. (Olivier Douliery/AFP via Getty Images)
By Zachary Stieber

A jury has found a former U.S. Capitol Police (USCP) officer guilty of obstructing the investigation into the Jan. 6, 2021, breach of the U.S. Capitol.

Michael Riley, 51, was convicted on Oct. 28 of violating a law that states a person who “alters, destroys, mutilates, or conceals a record, document, or other object, or attempts to do so, with the intent to impair the object’s integrity or availability for use in an official proceeding” shall be punished by up to 20 years in prison.

But jurors deadlocked on a second obstruction charge, and U.S. District Judge Amy Berman Jackson, an Obama appointee overseeing the trial, declared a mistrial on that count.

On that count “we have, after lengthy discussions and multiple approaches, reached a deadlock that we feel certain will not shift,” the jury said in a note to Jackson.

The charge alleged Riley caused or induced a person to “alter, destroy, mutilate, or conceal an object with intent to impair the object’s integrity or availability for use in an official proceeding.”

Riley was charged in 2021 with obstruction after authorities said he told a Jan. 6 attendee to remove photographs from their Facebook page.

Riley then deleted messages he exchanged with the person several days after the person was arrested, according to charging documents.

Riley’s lawyers lodged a motion for acquittal during the trial. Jackson reserved judgement on the motion until after the trial.

“Michael Riley never obstructed any grand jury proceeding, nor did he attempt or intend to do so, and he looks forward to continuing to raise all legal arguments in his defense consistent with the briefing schedule set by the Court on the still pending motion for judgment of acquittal, on which the Court reserved ruling until after the verdict, and in any future appeal, to the extent one becomes necessary,” Christopher Macchiaroli, one of the lawyers, told The Epoch Times via email.

Riley plans to appeal if the court denies the motion for acquittal on the charge for which the jurors returned a guilty verdict.

The USCP did not respond to a request for comment.

After the charges were announced, USCP Chief Tom Manger said that obstruction of justice “is a very serious allegation” and that after learning of the allegations, Riley was placed on leave pending the completion of the case.

“As is the case with many of his colleagues, Officer Riley engaged in acts of heroism on January 6, 2021, responding to the attack on the U.S. Capitol,” his lawyers said in a statement at the time. “With regard to the charges against him, the evidence will show that it is not a felony for one person to suggest to another that they take down ill-conceived Facebook posts.”