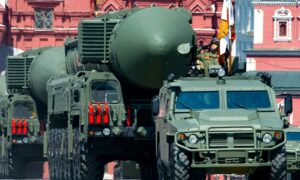 Federal prosecutors have charged a former University of Florida professor with concealing support he received from the Chinese Communist Party (CCP) while collecting $1.75 million in U.S. taxpayer grant money for research that benefited a firm he secretly founded in China.

Lin Yang, 43, lived in Tampa, Florida, when he committed the alleged offenses, which include six counts of wire fraud and four counts of making false statements, according to an indictment unsealed on Feb. 3.

“According to the indictment, the defendant intentionally deceived both his employer and the federal government in order to obtain more than a million dollars in research funding. Rather than being open about his ties to the People’s Republic of China, the defendant chose to conceal them, in the process advancing both the Chinese government’s strategic goals and his own financial interests,” Assistant Attorney General John Demers said in a statement.

Authorities allege that Yang, an associate professor in the university’s Department of Biomedical Engineering, obtained a $1.75 million grant from the National Institutes of Health (NIH) to develop an imaging tool for muscles called “MuscleMiner.” As the principal investigator for the grant, Yang was required to disclose his foreign research and conflicts of interest, including any interest or ownership in foreign firms.

Without disclosing his actions as legally required, Yang started a business in China called “Deep Informatics” and applied for the CCP’s Thousand Talents Program. The CCP uses the Thousand Talents Program to offer financial incentives for the transfer of intellectual property from abroad. The indictment alleges that Yang concealed his work in China to keep his university job, and made several statements in submissions to the NIH and in a written statement to the University of Florida (UF), in which he claimed he had no ties to any entity in China.

“The taxpayer dollars that funded Yang’s research were intended to benefit the health and well-being of U.S. citizens. But our indictment alleges that Yang engaged in acts of deliberate deception so that he could also further the research goals of the Chinese Communist government and advance his own business interests,” according to U.S. Attorney Lawrence Keefe for the Northern District of Florida.

Yang went to China in August 2019 and hasn’t returned to the United States.

“For too long, our academic institutions have fallen prey to foreign agents from the #CCP. We will not tolerate spying from the People’s Republic of China, period,” Rep. Kat Cammack (R-Fla.) wrote on Twitter. “As the representative hailing from Gainesville—home to UF—I will ensure proper coordination between the university and DOJ to maintain a continual oversight role as this case moves forward.”