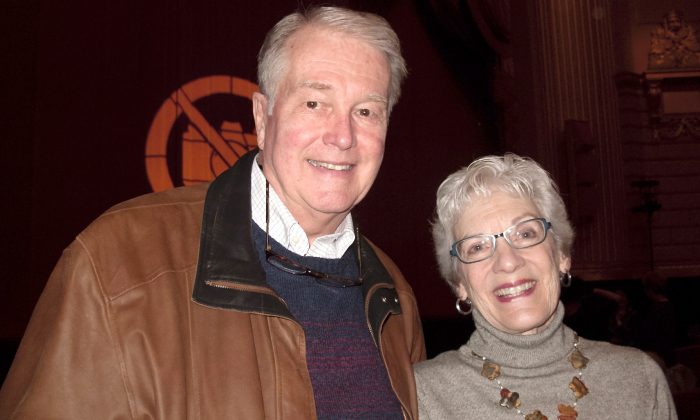 SAN FRANCISCO—Seeing Shen Yun Performing Arts at the War Memorial Opera House was a first-time experience with Chinese culture for the retired university administrator, Gary Hammerstrom and his wife in San Francisco, Jan. 11.

Hammerstrom said that he was “not familiar with Chinese dance before so it’s an experience for both of us and we find it quite interesting.”

For many people, Shen Yun is their first encounter with Chinese dance and they are intrigued by the wide array of flips, jumps, and spins, not to mention its highly expressive qualities through bearing and form.

Mrs. Hammerstrom was enthralled by the use of backdrops in the show, as well as the dancers’ exactitude.

“I’m just fascinated with the way the choreography works with the background and I think that technology is amazing. It’s just as amazing as the dancers.” Mrs. Hammerstrom said. “The dancers and the precision that they have is just really something to see.”

The animated digital-backdrops of Shen Yun’s stage, designed to transport one between heaven and earth, are specially coordinated with the dance choreography to tell stories and integrate all facets of the performance, from costumes to audio effects.

As Shen Yun strives to revive China’s traditional heritage, more and more people come to understand the true beauty of a culture that was once almost lost. First-timers not only leave the theater with an enriched knowledge of the ancient civilization, but with a newfound love for classical Chinese arts.