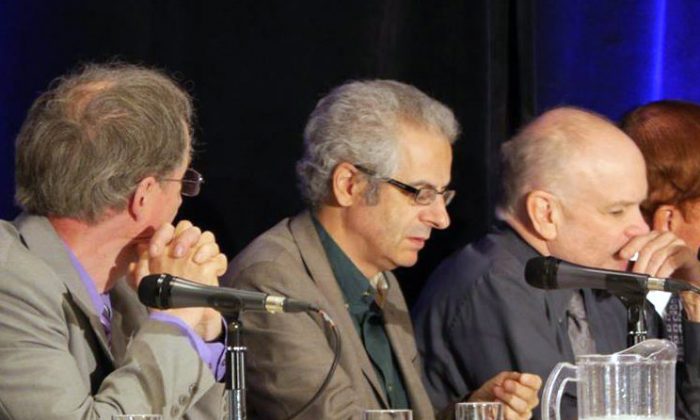 Nick Pope, a former UK Ministry of Defence official who was responsible for the government's unidentified aerial phenomena (UAP) files in the '90s, testifies at a UAP disclosure hearing in Brantford, Canada, on June 25, 2016. (Courtesy of Zland Communications)
Beyond Science

A closer look at one of the best-known and 'most compelling' unidentified aerial phenomena reports, the Rendlesham Forest incident
By Tara MacIsaac

Nick Pope has been called “the real Fox Mulder.” He worked as a high-level official for the U.K.’s defense ministry for 21 years, retiring in 2006, and he ran the ministry’s unidentified aerial phenomena (UAP) project in the ’90s.

He shared some of his knowledge on the subject at a disclosure hearing in Brantford, Canada, on June 25. The hearing included testimony by experts, such as Pope, on the subject of government UAP intelligence (UAP has replaced UFO, or unidentified flying object, as the preferred terminology; it was used by the ministry to “avoid the pop-culture baggage that comes with the term ‘UFO,'” Pope said).

He did not find a hidden alien spacecraft in a hangar, he said. He found no smoking gun—and no “smoking man” as Fox Mulder did in the “X-Files” TV show.

The MoD decided in 2007 to release all of its UAP files. Some 60,000 pages have been made public thus far, with the last batch of documents expected to be released later this year. But many still believe knowledge of extraterrestrials could remain deeply hidden or may have been redacted from the released documents.

“There is in the U.K.—as there is in Canada and the United States—a widely-held belief that the authorities know more about UFOs than they are letting on,” Pope said, attributing this belief to two factors. “Firstly, the MoD was (and still is) an inherently secretive organization, despite the introduction of the U.K.’s Freedom of Information Act. Secondly, it was the longstanding policy of the MoD … to downplay the true extent of the department’s interest in UFOs and the scope of our research and investigation.”

Pope was responsible for talking to the media about UAPs as an MoD representative. At the hearing, he apologized for his role in misleading the public about the MoD’s interest in UAPs. The catch-all response to media inquires was that UAPs were “of no defense significance,” Pope said, although away from public scrutiny the MoD took a keen interest in the matter.

At the hearing, he apologized for his role in misleading the public about the MoD’s interest in UAPs.

He read out portions of declassified documents that show the MoD’s air-safety concerns: “At higher altitudes, although UAP appear to be benign to civil air traffic, pilots should be advised not to manoeuver … if possible.”

Another recommendation stated: “No attempt should be made to out-manoeuver a UAP during interception.”

Many UAP sightings were reported by civilians, but the reports of most interest to Pope were those related to sightings by pilots, police officers, and military personnel.

Pope said that the U.K.’s best-known and “most compelling” UAP incident is the so-called “Rendlesham Forest” incident, a series of sightings reported by military personnel that occurred in December 1980.

The sightings took place near the twin military bases of Bentwaters and Woodbridge [in the U.K.], operated by the United States Air Force (USAF). There were several dozen military witnesses, the most senior of whom was the deputy base commander, Lieutenant Colonel Charles Halt.

On the first night, two members of the USAF who had been sent to investigate what was thought to be the crash of a light aircraft encountered an unknown object, which had apparently landed in a small clearing. One of them got close enough to see strange hieroglyphic symbols on the side, and indeed to touch it. The craft rose slowly above the trees and then accelerated away at great speed.

A subsequent USAF investigation of the landing site showed indentations in the ground, scorch marks on the sides of the trees, and radiation levels which the MoD’s defense intelligence staff assessed as “significantly higher than the average background.”

The UFO was briefly tracked on military radar. Two nights later, the UFO returned and was witnessed by the previously skeptical deputy base commander, who had gone to investigate with a small team of men. At one point the mystery object fired a narrow beam of light down at their feet, and later it was seen firing light beams at a particularly sensitive area of the military base. Despite extensive investigations, neither the U.K. nor the U.S. government ever found any conventional explanation for these events, which remain unexplained to this day.

Epoch Times followed up with Pope via email to address some of the critiques that have attempted to show the Rendlesham incident involved a conventional phenomenon.

Epoch Times: Science writer Ian Ridpath disputes the claim that the radiation at the site was higher than the background radiation. He has said the conclusion that the radiation was unusually high was based on incomplete information about the readings taken by Col. Halt (it wasn’t taken into consideration, for example, that the device Halt used for detection was very sensitive, affecting the readings). Ridpath said that Giles Cowling at the U.K. government’s Defense Evaluation and Research Agency agrees with him on this and so does the National Radiological Protection Board.

Pope: While Ridpath has written about science, he’s not a scientist himself, and is simply a ufologist who has tried to portray himself as an expert on this case. He has misunderstood how science works: One can only study the data one has, not the data one thinks one should have.

In other words, it’s no good trying to argue that the Geiger counter was over-sensitive, or that the readings might have been misread. The equipment used was the equipment available, and it was operated by a disaster-preparedness expert trained in its use.

The MoD’s defense intelligence staff assessed the radiation levels as being “significantly higher than the average background” shortly after the incident, and this assessment was validated by the Defence Radiological Protection Service in 1993 when I undertook a cold case review.

It’s not appropriate for ufologists like Ridpath, for whom this is a hobby, to second guess the scientists who do this sort of thing as part of their government jobs. … It muddies the waters of an already complex case.

Here’s a link to the defense intelligence staff assessment of the radioactivity levels at the landing site.

Epoch Times: The indentations in the ground on the site and the scorch marks on the trees surrounding the site have been attributed to animals and loggers respectively.

Pope: The disaster-preparedness expert operating the Geiger counter observed evidence that a high heat source was present on the trees surrounding the landing site, but only on the sides of the trees that faced the clearing, and were thus exposed to heat from whatever the object was that landed in the clearing.

The heat referred to here is both ordinary heat (in terms of temperatures so high that they scorched the trees) and radioactivity. The ground was hard and frozen due to the weather conditions and it was estimated that the object that made the indentations must have weighed several tons, so self-evidently the theory that the marks were caused by animals is nonsense.

The ground was hard and frozen due to the weather conditions and it was estimated that the object that made the indentations must have weighed several tons.
— Nick Pope, former UK Ministry of Defence official

Epoch Times: Do the witness accounts (particularly those of the two primary military personnel witnesses, Jim Penniston and John Burroughs) contradict or do they agree on all points? Have they changed significantly over time?

Pope: There are differences between the accounts of some witnesses, and some stories have evolved over time. As somebody who has investigated hundreds of UFO sightings for the government, this doesn’t surprise me or trouble me at all, and indeed it’s exactly what I’d expect.

People’s memories and perceptions vary, in the same way as people have different characters and personalities. Moreover, everyone’s recollections and opinions change over the years, and it should be borne in mind that the Rendlesham Forest incident occurred 36 years ago.

I’d be much more suspicious if everybody’s story was exactly the same, because that’s often a sign that witnesses have sat down together and colluded.
— Nick Pope, former UK Ministry of Defence official

I fully expect to see accounts vary, just as any police officer will tell you that witnesses to a road traffic accident will often have differing accounts of what they believe happened. I’d be much more suspicious if everybody’s story was exactly the same, because that’s often a sign that witnesses have sat down together and colluded.

Epoch Times: Aside from the heiroglyphs seen by one of the witnesses, are there any other aspects of this incident that absolutely could not be attributed to secret high-tech human operations?

Pope:  Indeed, I can’t entirely rule out the possibility that what was involved at Rendlesham was a secret prototype aircraft or drone of some sort. I think it’s highly unlikely, given the details, and indeed this possibility was checked by both the MoD and the USAF.

I can’t entirely rule out the possibility that what was involved at Rendlesham was a secret prototype aircraft or drone of some sort.
— Nick Pope, former UK Ministry of Defence official

But one cannot completely discount the possibility of a secret project unknown even to those of us in government charged with investigating this incident. Of all the skeptical theories put forward over the years it’s the only one we assessed as being remotely possible.

Epoch Times: An officer came forward years ago saying he perpetrated a hoax at Rendlesham, flashing the lights on his emergency vehicle. Some have attributed it to meteor activity, which was high that night. Some have said it was a nearby lighthouse. How do you respond to these explanations?

Pope: The MoD examined and ruled out these theories.

Any meteors visible on the night concerned would have involved a brief flash of light high in the sky, visible for only a few seconds. As for the lighthouse, it wasn’t visible from most areas from which the UFO was seen, and at one point Colonel Halt had the UFO in sight at the same time as the lighthouse, proving the lighthouse couldn’t have caused the sighting.

And clearly neither meteors nor a lighthouse can possibly account for the sighting of a landed craft that left indentations in the ground, burn marks on the trees, and radioactivity at the landing site.

It should also be remembered that the UFO was briefly tracked on radar. I’m familiar with the hoax theory, but having checked the position, the individual concerned wasn’t even on duty at the time of the incident, so even if his practical joke took place at all (and we only have his word for it—nobody else saw him do it, so it’s just an unverified story by a single individual), it had nothing to do with the Rendlesham Forest incident.