First female governor in the state 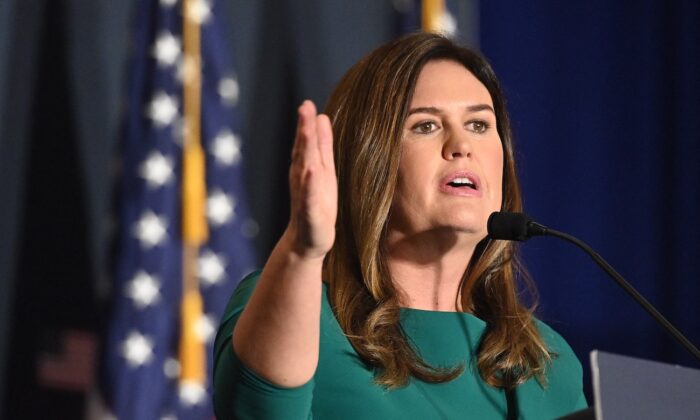 Sarah Huckabee Sanders, former White House press secretary under President Donald Trump, has been elected the governor of her home state of Arkansas.

Sanders, who had been heavily favored to win the race, defeated her Democrat opponent, Chris Jones, with over 62.9 percent of the vote.

It is also the first time a father and daughter have served as governor for the solid Republican state. Sanders is the daughter of former Arkansas Gov. Mike Huckabee. He served as governor of Arkansas from 1996 through 2007 and ran as a Republican presidential nominee in 2008 and 2016. Sanders had previously appeared in ads for her father and worked on his campaigns.

Sanders shattered state fundraising records with her campaign, which focused primarily on national issues. She regularly promised to use the office to fight the policies of President Joe Biden and the “radical left.”

In her acceptance speech on Tuesday night, Sanders shared stories about supporters she met during her campaign.

“This election is about taking Arkansas to the top,” she said. “I know that Arkansas can be first, and I’m committed to being the leader who takes us there.”

Sanders is due to be inaugurated in January. She succeeds incumbent Arkansas Gov. Asa Hutchinson, a Republican, who is leaving office as he cannot seek re-election to a third term because he is term-limited. Hutchinson endorsed Sanders’s bid.

The governor-elect’s last major role in politics was as White House press secretary under Trump from 2017 through 2019. She later secured an endorsement from the former president for her gubernatorial run. Trump had also previously publicly encouraged Sanders to run for governor when she left the White House in 2019 to return to her home state.

In September, she briefly paused her campaign to undergo surgery for thyroid cancer, which her doctors deemed successful.

Jones did not concede the race on Tuesday night. “We’re going to count every last vote in this race,” he told supporters. “Why? Because Arkansas deserves it and Arkansas is worth it.”