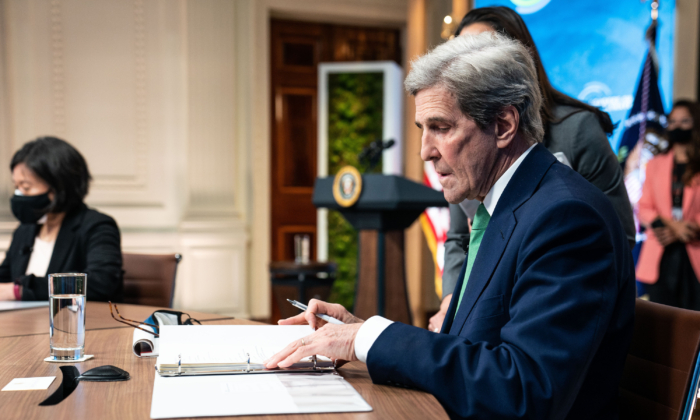 John Kerry, the Special Presidential Envoy for Climate, looks at his notes before the start of the virtual Leaders Summit on Climate in the East Room of the White House on April 23, 2021. (Anna Moneymaker-Pool/Getty Images)
Democrats

“He did it all the time,” Kellogg told Just the News when asked if Kerry sent a conflicting message to Iran. “By just the very fact that he went over there, and the fact that he talked to [Iranian Foreign Minister Mohammad Javad] Zarif, sent a very, very strong counter-message to what we were trying to do out there.”

“We read cables and we understand what’s going on,” Kellogg said. “We talked about it in the Oval Office several times. It was not helpful what he was doing, because he was basically countering every message we were putting out there and trying to push them into some type of negotiation.”

Trump reimposed tough sanctions on Iran after exiting the multilateral nuclear deal with the Islamist regime. The measures crippled the oil-rich nation in a bid to force Iran to commit to denuclearization.

“I was in there many times when the president would reach out to people like Macron of France, he would reach out to Boris Johnson in UK and trying to get them to be an intermediary to talk to the Iranians to get us into some type of discussions. And we always had a pushback,” Kellogg said. “Because we had people like Kerry out there talking to Zarif and others.”

It appears the Trump administration did nothing to hold Kerry back, causing a headache to Kellogg and others.

“We knew what he was doing and the frustration we had is that it was basically acknowledged by everybody, and nobody cared about if one of us has [sic] done that,” Kellogg said.

Kerry, who is now President Joe Biden’s special envoy for climate, recently defended telling Zarif about the number of times Israel struck Iranian targets. Kerry said the information was in the public realm. Kerry’s message cited a Twitter message by a journalist who had pointed to a news report in which a senior Israeli official said that Israel had attacked Iran’s interests in Syria 200 times, the same number Kerry disclosed to Zarif. It’s unclear if Kerry’s conversation with Zarif predated the public report.

The White House didn’t immediately respond to a request by The Epoch Times for comment from Kerry and the Biden administration.

Kellogg said that disclosing classified information is still illegal even if it’s out in the public realm.

“Even if it’s public record, you never acknowledge classified operations. The press may get it, but you don’t acknowledge it,” Kellogg said.

News about Kerry’s disclosure to Zarif surfaced after a report on a leaked interview of Zarif conducted in March.

In the leaked audio, Zarif, Iran’s top diplomat, complains that the elite Revolutionary Guards had more influence in foreign affairs and the country’s nuclear dossier than he did.