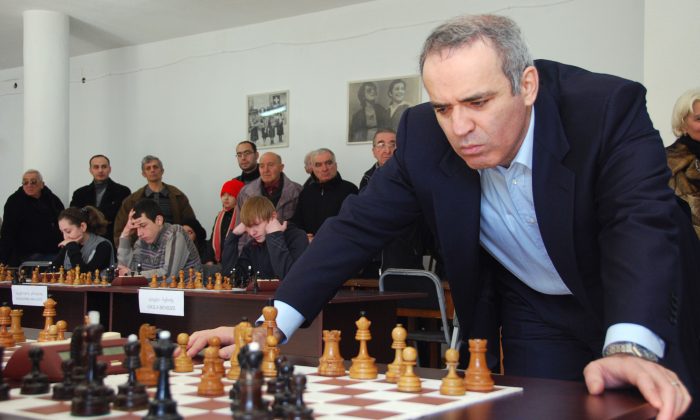 Chess grandmaster, former World Chess Champion and one of the leaders of Russian political opposition Garry Kasparov plays simultaneous chess games in Tbilisi on February 16, 2011, during his visit to Georgia. Kasparov has become one of the Kremlin's most outspoken critics -- a stance that is admired in pro-Western Georgia, which fought a war with Russia in 2008. AFP PHOTO/ NINA SHLAMOVA (Photo credit should read NINA SHLAMOVA/AFP/Getty Images)
2016 race

Garry Kasparov is one of the greatest chess players of all time, and an outspoken political activist against Putin and the Russian government. Recently, the former citizen of the Soviet Union criticized Bernie Sanders’s “political revolution” as a “dangerously absurd” way to address the problem of income inequality.

In the initial Facebook post, Kasparov argues that “talking about Socialism is a huge luxury, a luxury that was paid for by the successes of capitalism.”

I’m enjoying the irony of American Sanders supporters lecturing me, a former Soviet citizen, on the glories of Socialism…

The post went viral and he expanded on the idea in an op-ed piece published by The Daily Beast on March 10, where he said that he “respect[s] and even like[s] Bernie Sanders,” but that the problem Kasparov has with the senator are his proposed solutions.

“The problem is with the proposed solutions. A society that relies too heavily on redistributing wealth eventually runs out of wealth to redistribute. The historical record is clear. It’s capitalism that brought billions of people out of poverty in the 20th century. It’s socialism that enslaved them and impoverished them.”

He admits that there are differences between the type of government Sanders proposes (Democratic Socialism) and the totalitarian government that he grew up in. He also admits that a free market system “can be cruel.”

However, he argues that capitalist systems, by definition, have “winners and losers,” and out of that competition are both “sparks of creativity” and failure.

On the marvels of technology and creative innovation, Kasparov points out that his Facebook post is an example of innovation allowed by capitalism: “Innovation requires freedom of thought, freedom of capital, and people who believe in changing the world.”

Innovation requires freedom of thought, freedom of capital, and people who believe in changing the world
— Garry Kasparov

For solutions, Kasparov looks not to modern day Scandinavia, Denmark, Venezuela, or France, but to early 20th century America leaders like President Teddy Roosevelt and President William Taft who fought against big banks and corporate monopoly.

Born and raised in the Baku, Azerbaijan (then USSR), Kasparov was an outspoken dissenter of the Soviet Union as he reigned Chess World Champion from 1985 to 2005. In 2005 he retired to become a full time political activist and in 2012 was arrested and beaten while attending the trial for the feminist punk band and free speech advocates Pussy Riot.

Garry Kasparov is also a published author with his latest book called “Winter Is Coming: Why Putin and the Enemies of the Free World Must Be Stopped” released in October 2015.