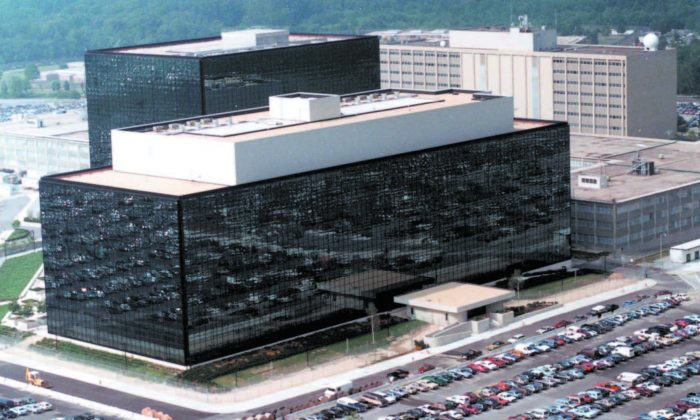 The National Security Agency headquarters in Fort Meade, Md., in this file photo. (NSA VIA GETTY IMAGES)
By Bill Pan

A former employee of the National Security Agency (NSA) has been charged with espionage for allegedly trying to sell classified national defense information to an undercover agent he believed to be working for a foreign government, the Department of Justice (DOJ) said.

Jareh Sebastian Dalke, a 30-year-old Army veteran of Colorado Springs, Colorado, worked at the NSA as an information systems security designer from June 6 to July 1, 2022. According to the DOJ, Dalke used an encrypted email account to transmit excerpts of three classified documents he had obtained during his employment to an undercover FBI agent disguised as a representative of a foreign government.

Dalke was arrested on Sept. 28, after he arrived at a public location in Denver, expecting to meet the undercover agent and transfer one additional classified document. He allegedly told the agent that he had a debt of $237,000, and asked for a “specific type of cryptocurrency” in exchange for the “highly sensitive information” he possessed. The FBI ended up sending him about $4,600 worth of cryptocurrency as a “good faith payment” to help with his financial problems.

While the foreign government isn’t identified, the affidavit states that Dalke claimed to have reached out to the Russian Foreign Intelligence Service, or SVR, to ensure that he was actually communicating with a foreign government entity “rather than Americans trying to stifle a patriot.”

According to the affidavit, Dalke had expressed dissatisfaction with what the United States had become. “This country is not as great as it thinks it once was,” he allegedly said. “It is all about the businesses and their money, not anything about the people or those that serve it to include the military.”

Dalke is charged with three violations of the Espionage Act, which makes it a crime to transmit or attempt to transmit national defense information to a foreign nation knowing the information could be used against the United States or to the advantage of a foreign nation. If convicted, he could face the death penalty or any number of years up to life in prison.

The announcement comes as Edward Snowden, a former U.S. intelligence contractor who famously exposed the NSA’s massive domestic surveillance program in 2013 and has remained in exile in Russia ever since, was granted Russian citizenship.

“After years of separation from our parents, my wife and I have no desire to be separated from our son. That’s why, in this era of pandemics and closed borders, we’re applying for dual US–Russian citizenship,” Snowden wrote on Twitter in November.

On Sept. 26, he wrote: “After two years of waiting and nearly ten years of exile, a little stability will make a difference for my family. I pray for privacy for them—and for us all.”

Snowden fled to Russia after the Justice Department charged him with violating the Espionage Act. He initially lived there under political asylum and was granted permanent residency in 2020.