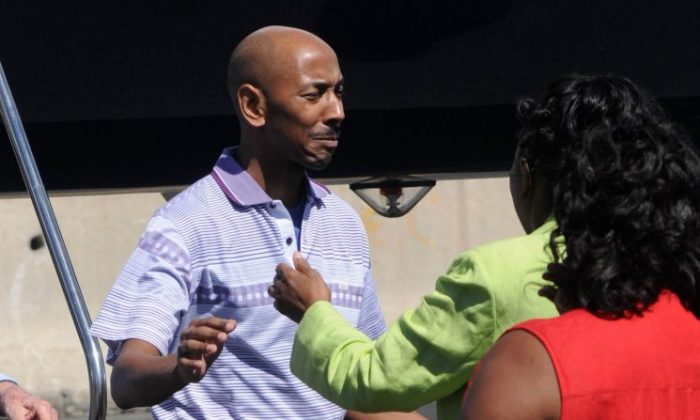 Aijalon Mahli Gomes greets his mother after stepping off a plane on Aug. 27, 2010, at Logan International Airport in Boston, Mass. (Darren McCollester/Getty Images)
US News

An American teacher who was imprisoned in Korea eight years ago was spotted running and engulfed in flames on Friday, Nov. 17,  in a field near a San Diego highway.

Aijalon Gomes, 38, eventually collapsed and died of his injuries at the scene, San Diego police said.

An off-duty California Highway Patrol officer was driving west on Pacific Highway near Sea World Drive when his spotted Gomez, according to Lt. Todd Griffin. The officer ran to help Gomes while first responders arrived, but Gomes succumbed to his injuries.

Investigators suspect the death is either an accident or a suicide, but are suspending the final call on the matter until an autopsy is conducted by the San Diego Office of the Medical Examiner.

Gomes made international headlines in 2010 when he crossed the frozen Tumen River from China into North Korea. He was caught by border guards and eventually sentenced to eight years of hard labor and fined $700,000, the San Diego Tribune reported.

“I was praying each and every day,” Jacqueline McCarthy, Gomes’s mother, told NBC on Tuesday. “They would not let me talk to him.”

Gomes wrote a book about his ordeal after his release. According to the Amazon description of the book, Gomes described the psychological torment of incarceration and hard labor.

“When he got off the plane, he got on his knees and was very thankful he was home,” McCarthy said about her son.

Carter said that Gomes attempted suicide inside the North Korean labor camp several times including through starvation and slitting his wrists.

Gomes’s mother said that he had recently moved to San Diego from Boston. Gomes became withdrawn from family in the years since his release, communicating more through text than in person. McCarthy believes Gomes had post-traumatic stress disorder.

“I know it affected him,” she said.

McCarthy said she was shaken by the news.

“I couldn’t picture my son doing that to himself,” she said.

“My son was a very good human being,” she said. “He loved people. He loved his family.”

She said he left a teaching job to care for his grandparents before he went to South Korea.

“He was selfless. He was always giving his last to everyone.”