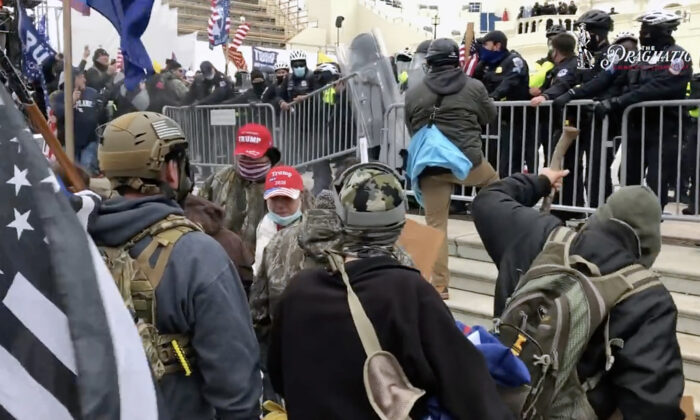 Law enforcement aware large crowds would be travelling to Capitol from the Ellipse, documents show
By Joseph M. Hanneman

The man whose posting on social media warned authorities that agent provocateurs from Antifa and Black Lives Matter would be at the U.S. Capitol dressed as Trump supporters on Jan. 6, 2021, is a self-described government informant tied to former deputy attorney general Rod Rosenstein.

Rosenstein warned about a “soft coup” against then-President Donald Trump in fall 2020.

On Jan. 4, 2021, an account under the name @JohnHereToHelp posted on Twitter that Antifa and BLM agitators were being bussed from Baltimore to Washington to cause trouble at the Capitol on the day of Trump’s speech at the Ellipse.

“Pantifa/BLM, Balt./DC branches, are already bussing people in to disturb Jan. 6,” the post read. “Orders [were] given to dress like ‘MAGA,’ blend in [and] cause trouble, especially around cameras. At night, arson has been ordered. All to be blamed on Trump supporters attending. Please be careful.”

The post caught the attention of an assistant commander in the Intelligence and Counterterrorism Branch of the United States Park Police, who forwarded it to officials at the U.S. Capitol Police, the D.C. Metropolitan Police Department, the Department of Homeland Security, and other agencies.

McGreevey has described himself in court papers and interviews as a former Department of Justice informant who supplied information on corruption in the federal government, law enforcement, and the Trump administration.

He once used the name Ryan White as a cover but now identifies as McGreevey. He is running for federal office in Maryland.

JohnHereToHelp’s original post was shared more than 6,000 times before it hit the radar of the Park Police.

At the time, McGreevey had more than 120,000 followers on Twitter, according to an archived version of his page stored at the Wayback Machine.

“There are multiple replies to this comment that says BLM/Antifa will wear MAGA hats backwards, wear camo, and attempt to blend in with MAGA crowd,” the Park Police official wrote to his colleagues on January 5, 2021.

The Wayback Machine archive of White’s post shows nearly 600 replies, but the replies are not visible from links on the website.

The emails, part of a trove of documents obtained in 2021 through a Freedom of Information Act lawsuit by Judicial Watch, show that federal law enforcement knew that infiltrators could be among the crowds at the Capitol.

They also back up anecdotal reports of BLM and Antifa activists from Oregon, Maryland, and other states causing disruption and committing vandalism on Jan. 6.

Trump supporters tangled with alleged Antifa provocateurs in several spots on Jan. 6, including the Lower West Terrace of the Capitol.

Victoria White of Rochester, Minnesota, scuffled with a man attempting to break an arched window adjacent to the Capitol’s tunnel entrance.

As the tightly-packed crowd chanted “[expletive] Antifa,” White wrestled for control of the red wooden club wielded by the man, who wore a green helmet with Trump stickers.

“Who brings something like that to a Trump rally, let alone to break out the Capitol windows?” White said. “That’s not us. That’s not what patriot Americans do. We don’t do that stuff.”

After another man got control of the club and began smashing the window, White helped pull him down before she was pulled away by other bystanders.

Members of the crowd vented anger at the vandals. “We are not Antifa!” one protester shouted. A man with a green stocking cap pulled over his MAGA hat pulled what appeared to be a stereo speaker from a backpack, spurring more howls of protest from the crowd.

While conducting a live stream on January 6, independent journalist Tayler Hansen recognized a protester in a gas mask from her appearance at riots in Portland, Oregon.

“I recognize you from Portland,” Hansen told the woman as she quickly turned away from the camera.

“So you’ve got Antifa here, too. You have Antifa and Trump supporters within the same vicinity here for the same thing. This is absolutely [expletive] crazy.”

The documents obtained by Judicial Watch include other disclosures that run counter to the prevailing Jan. 6 narrative that a mob incited by Trump rampaged to the Capitol to storm the building and upend the counting of Electoral College votes.

A “Daily Operational Snapshot” circulated by U.S. Park Police on Jan. 5 noted multiple events planned for the area around the Capitol.

“Large crowds expected to gather at and travel between the Ellipse and the U.S. Capitol,” the document said.

Other scheduled events included a Freedom Rally, Jericho March, the March for Trump, and the “Wild Protest.”

A MAGA Rally Map Guide said of the Wild Protest: “We the people must take to the U.S. Capitol lawn and steps and tell Congress #DoNot Certify on #Jan6!” U.S. Park Police circulated a copy of the map to other agencies.

The WildProtest.com website said, “The Congress cannot certify this fraudulent Electoral College. Our presence in Washington D.C. will let Members of Congress know that we stand with Rep. Mo Brooks and his colleagues in the House of Representatives who will bravely object to the certification of the Electoral College.”

The activist group ShutDownDC circulated a statement asking people to call hotels and demand they cancel reservations of “people coming to town to undermine democracy on Jan. 6.”