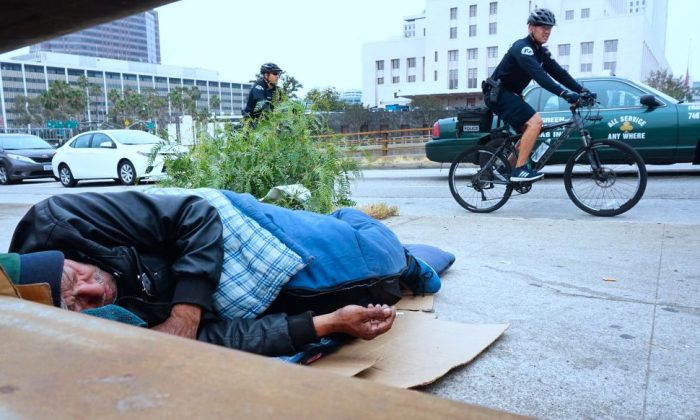 As drug overdose deaths rise in California, state leaders are considering paying addicts to stay sober, but a former drug addict questions the efficacy of the incentive known as SB 110.

Yolanda Terrazas, a former addict and current secretary for The Salvation Army Adult Rehabilitation Center in Anaheim told The Epoch Times the proposed legislation provides only a temporary solution as addicts will use the money to purchase drugs.

“All they’re doing is giving them money to temporarily stop and they’ll just turn around and spend that money and find another way to receive funds. Somebody else will pay for their addiction; while they temporarily stop using, they won’t gain anything if they don’t have skills, knowledge, or tools to use.”

Terrazas said that addicts need more proactive solutions, such as organizations that provide programs that allow addicts to find sobriety to last a lifetime. Rather than giving funds to addicts, the money should be used to assist in finding employment for individuals who complete addiction programs, she said.

Before finding employment at The Salvation Army eight months ago, Terrazas joined the organization’s six-month rehab program to get sober. The program taught her communication and employment skills while providing a structured schedule she accredits to helping her get sober.

Every day, the beneficiaries of the program are tested. Terrazas is approaching her two-year sober anniversary next month.

While discussion on contingency management payments to encourage addicts to remain sober continues, similar legislation is supported by both Republicans and Democrats.

According to co-author of the substance use contingency bill Assemblywoman Laurie Davies, studies have shown that contingency management programs have been effective for veterans that are meth addicts.

“California’s opioid epidemic shows no signs of slowing down, even during the COVID-19 pandemic,” Davies told The Epoch Times in an email. “For years, our state has struggled to get a handle on this crisis, and for years, we have seen preventable suffering and loss.”

Davies said SB 110 is a “common-sense measure to try an all-of-the-above approach to really incentive people to get away from substance abuse.”

The legislation proposes that through MediCal, low-income residents can receive substance use disorder services and care.

Through the proposed contingency management services outlined in SB 110, beneficiaries will be limited to the number of incentives received.