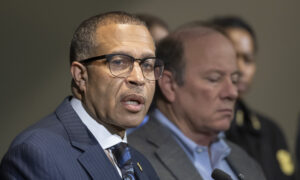 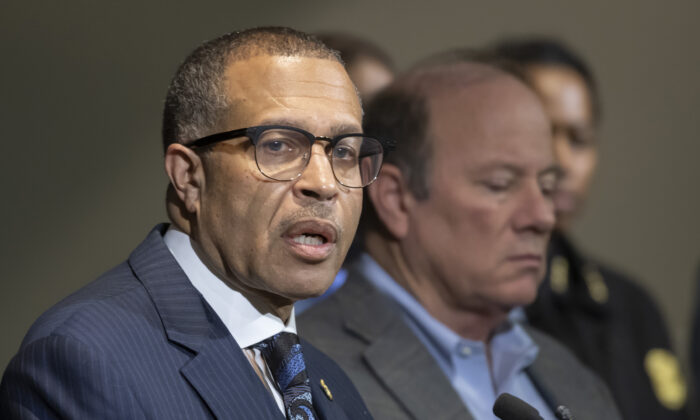 A former Detroit police chief on Tuesday announced a bid to unseat Michigan Gov. Gretchen Whitmer, delivering remarks after the initial announcement was disrupted by protesters.

James Craig, a Republican, planned to launch his campaign on Belle Isle, but Detroit Will Breathe, a far-left group that describes itself as a movement that seeks to advocate against “police brutality towards black lives,” drowned him out, forcing him to switch to a nearby location.

Video footage from the scene showed the protesters chanting “James Craig has got to go” and “black lives matter.” Many of them were white and Craig is black.

Craig reconvened the press conference on the rooftop of a nearby building.

“Small group of paid protesters did nothing. What they did is reinforce why we need change,” Craig told reporters. “The message is: I’m winning. I got the message out anyway. I’m winning.”

Craig has teased a gubernatorial run in recent months, announcing in July that he was forming an exploratory committee that he said would let him start fundraising.

In a video released that month, Craig described himself as a problem solver who would “lead from the front.”

Craig, 65, who retired as chief of police on June 1, said Tuesday that his campaign would “resonate with those folks up north or on the west, because I’m authentic, I’m a leader, and I’m blue-collar.”

“I know what hard work looks like. Nobody’s ever given me anything,” he added.

Craig later used the disruption by Detroit Will Breathe, which wants to defund the police and the release of all people in prison because of nonviolent offenses, to fundraise.

Craig joins a field of nine Republicans, none of whom have held political office before.

Whitmer, 50, was a longtime state lawmaker before becoming governor in 2019.

Whitmer beat Republican candidate Bill Schuette, a lawyer, with approximately 53 percent of the vote in 2018. She succeeded Rick Snyder, a Republican who was prevented from running again due to term limits.

Early polls suggest Craig and Whitmer are neck-and-neck with about 14 months before the general election.

Michigan Democratic Party Chair Lavora Barnes said Craig’s year has been a disaster and pointed to his refusal to answer whether he supported former President Donald Trump.

“Don’t expect him to lead from the front by addressing his main problem—his adamant refusal to answer questions directly. Despite being asked several times now, the Detroit Dodger still won’t say what he thinks about the legitimacy of our elections, who he thinks incited the violent insurrection in DC, or what he’ll do to protect the right to choose for Michigan women and families,” Barnes said in a statement.

The Whitmer campaign and the Michigan Republican Party did not respond to requests for comment.

Meshawn Maddock, the party’s co-chair, highlighted the protest against Craig’s announcement on Twitter. She shared an image that showed one protester holding a sign that said “defund DPD.”

“See the sign? These leftists want to defund your police. Republicans are the only sanity left in this Country. @GovWhitmer is finished,” she wrote. “Thank you BLM for reminding us what your world looks like.”