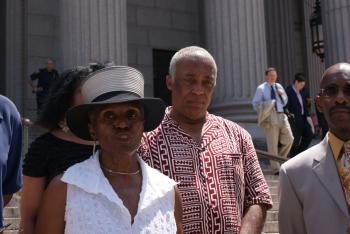 By Diana Hubert
Print
NEW YORK—Former Chief of Staff Viola Plummer is taking legal action against City Council Speaker Christine Quinn again after being fired in 2007 over what Quinn’s representatives referred to as “disruptive actions at the Council’s Stated Meeting.”

However, Plummer says that her dismissal was racially motivated.

Plummer, a 71-year-old African American and former employee of Council Member Charles Barron, was suspended in June 2007 after making a “disruptive” remark to express her discontent after Ms. Quinn blocked the co-naming of four blocks in the Bedford-Stuyvesant community in Brooklyn after renowned figure Sonny Abubadika Carson, who led protests against police brutality in the 1980s and founded the Black Men's Movement Against Crack.

Council Member Barron supports his former employee and highlights that Speaker Quinn has no legal authority in the selection, hiring and firing of city council members’ staff under NYC charter.

“Quinn is an elected city member: she’s a facilitator not a dictator, she’s not [Viola’s] boss,” said Council Member Barron on July 30.

“Only Charles Barron could have authority over her and not Christine Quinn,” added Plummer’s attorney Roger Wareham.

In 2007, after the proposal was submitted to co-name the four blocks after Carson, it was defeated by 10 votes. Of the 25 votes against adopting Carson’s name, 24 were white, while 14 of the 15 in favor were black, Latino and Asian.

A court document filed by Plummer states that “Quinn used her power and influence as speaker to have Sonny Carson’s name deleted from the list of names to be voted on by the council.”

Barren also believes that racism was a motive and that Quinn had all the votes in place to defeat an amendment to have Carson’s name for consideration.

Earlier this April, the United States Court of Appeals ruled that “Plummer’s First Amendment rights were not violated because of the undisputed disruption caused by her actions.” The case was thus closed.

Plummer has now decided to file a suit contesting her dismissal in 2007 by Speaker Quinn in the New York State Supreme Court.

She is asking to be reinstated as Council Member Barron’s chief of staff and be monetarily compensated for her lost wages and social security with interest.

The office of Christine Quinn did not respond in time for print.