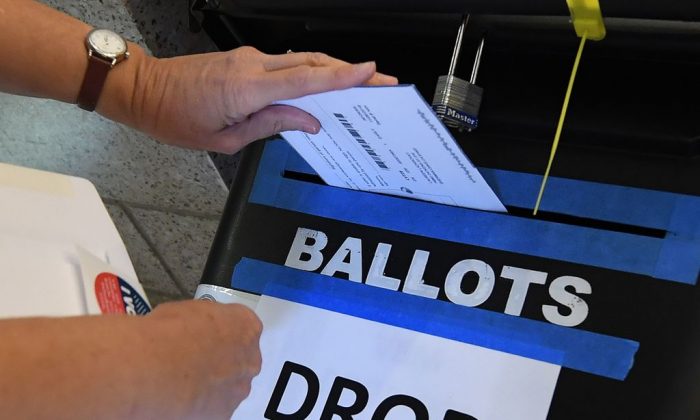 A voter places a ballot in a box during early voting for the midterm elections on Nov. 3, 2018. (RALSTON/AFP/Getty Images)
By Beth Brelje

Despite declarations of safe and secure elections, history shows that past Pennsylvania elections weren’t immune from corruption.

For example, former U.S. Rep. Michael “Ozzie” Myers, a Democrat from Pennsylvania, pleaded guilty to conspiracy to deprive voters of civil rights, bribery, obstruction of justice, falsification of voting records, conspiring to illegally vote in a federal election, and orchestrating schemes to fraudulently stuff ballot boxes for specific Democratic candidates in Pennsylvania elections from 2014 to 2018.

Myers was sentenced on Sept. 27 by U.S. District Judge Paul S. Diamond to 30 months in prison and three years of supervised release, and was ordered to pay $100,000 in fines, with $10,000 of that due immediately, according to a statement from U.S. Attorney Jacqueline C. Romero.

Directly after the Sept. 27 hearing in Philadelphia, Myers, 79, was taken into custody.

Myers served in the U.S. House of Representatives from 1976 until 1980, when he was caught taking bribes in an FBI sting operation. That was part of an old, completed investigation.

The Sept. 27 sentencing was a new matter in which Myers admitted that he bribed Domenick J. Demuro, a Democratic judge of elections for the 39th Ward, 36th Division in South Philadelphia, over several years to add votes for certain Democratic candidates.

Some candidates’ campaigns had hired Myers, while others were candidates that he favored. He admitted that he was paid consulting fees in cash or checks, then used portions of these funds to pay election officials to tamper with election results.

Myers also admitted to conspiring to commit election fraud with another former judge of elections, Marie Beren, a Democrat, in the 39th Ward, 2nd Division in South Philadelphia.

“Beren … was the de facto Judge of Elections and effectively ran the polling places in her division by installing close associates to serve as members of the Board of Elections,” Romero said in the statement. “Myers admitted that he gave Beren directions to add votes to candidates supported by him.”

Beren and Demuro were charged separately and previously pleaded guilty.

While the polls were open, Beren told in-person voters to support Myers’s candidates and to cast fraudulent votes in support of Myers’s preferred candidates on behalf of voters she knew wouldn’t be physically appearing at the polls, the Department of Justice (DOJ) said.

On Election Day, Myers kept in contact with Beren by cellphone, monitoring the number of votes cast for his candidates. Beren told him how many legitimate votes his candidates had. If voter turnout was high, Beren added fewer fraudulent votes. Sometimes, Myers told Beren to shift her efforts from one preferred candidate to another if it looked like his top preferred candidate was comfortably ahead.

“Beren and her accomplices from the Board of Elections would then falsify the polling books and the List of Voters and Party Enrollment for the 39th Ward, 2nd Division, by recording the names, party affiliation, and order of appearances for voters who had not physically appeared at the polling station to cast his or her ballot in the election,” a DOJ statement said.

“Beren took pains to ensure that the number of ballots cast on the machines was a reflection of the number of voters signed into the polling books and the List of Voters. After the polls closed on Election Day, Beren and her associates would falsely certify the results.”

Demuro was responsible for overseeing the entire election process and all voter activities in the 39th Ward, 36th Division in South Philadelphia.

The voting machines at each polling station, including in the 39th Ward, 36th Division, generate records in the form of a printed receipt documenting the use of each voting machine. This printed receipt, called the “results receipt,” shows the vote totals, and the judge of elections and other election board officials at each polling place attest to the accuracy of the machine results.

After receiving payments ranging between $300 to $5,000 per election from Myers, Demuro added fraudulent votes on the voting machine—also known as “ringing up” votes—for Myers’s clients and preferred candidates, thereby diluting the value of ballots cast by actual voters, according to the DOJ.

At Myers’s direction, Demuro added these fraudulent votes to the totals during Election Day, and later falsely certified that the voting machine results were accurate.

No Stranger to Prison

In a 1980 FBI operation dubbed the Abscam investigation, undercover FBI agents disguised themselves as businessmen and Arab sheiks and ultimately criminally charged seven members of Congress, alleging the politicians had accepted money from the phony sheiks, promising favors in return.

Myers was among those charged and was sentenced to three years in prison.

The FBI had videotapes showing the members accepting cash or stocks. In one, an agent hands Myers an envelope stuffed with $100 bills amounting to $50,000, saying, “Spend it well.” Myers responds, “Pleasure,” according to a report at the Library of Congress.

In response, the House Ethics Committee unanimously recommended expelling him.

Convinced of his innocence, Myers took his case to the House floor, where he pleaded, “When you push the ‘yea’ button on the voting machine, it will have the same effect as hitting the button on the electric chair.”

After leaving prison, he started a political consulting firm.