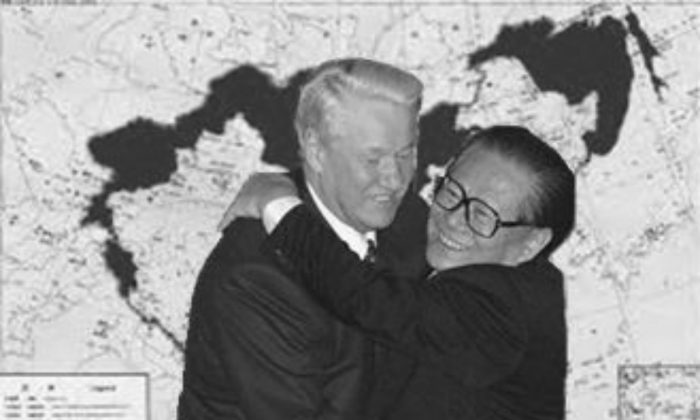 On December 9, 1999, former Chinese leader Jiang Zemin and then Russian President Boris Yeltsin signed a Sino-Russia border agreement, which fully acknowledged a series of unequal treaties between Russia and the Qing government and unconditionally gave away more than 1 million square kilometers of land in northeast China to Russia. (New Tang Dynasty TV)
Thinking About China

With the island dispute in the South China Sea heating up, the Chinese Communist Party (CCP) ought to explain to the Chinese people why former Chinese dictator Jiang Zemin gave away swaths of land 47 times the size of Taiwan to Russia and other neighboring countries—without ever being challenged.

In the Diaoyu Islands dispute between China and Japan, the CCP has insisted that the Diaoyu Islands have been China’s territory since ancient times. Then, isn’t it true that Vladivostok, which is equivalent to more than 40 times the size of the Diaoyu Islands, has also been China’s territory since ancient times? The Chinese name for Vladivostok is Haishenwei, a name from the Manchu language, meaning “a small fishing village by the sea.” In June 1860, it was occupied by the Russian army and renamed Vladivostok, meaning “Conquering the East” or “Ruling the East.” Its Russian name clearly indicates that it was robbed from China to show off Russian military power, and to humiliate China.

According to the Sino-Soviet Friendship and Alliance Treaty signed by the Soviet Union and the Republic of China in 1946, Vladivostok was to be returned to China 50 years later, in 1996. However, by 1996, the CCP seemed to have forgotten about recovering Vladivostok. And more outrageously, in December 1999, Jiang Zemin gifted Vladivostok unconditionally to Russia!

(1) Heixiazi Island, which is 70 times larger than the Diaoyu Islands, was occupied by the Soviets on September 29, 1929.

(3) Sakhalin Island, which is twice the size of Taiwan, was occupied by the Soviet army in August 1945.

(1) On May 28, 1858, the Russian government forced the Qing government to sign the Treaty of Aigun, which allowed Russia to forcibly occupy more than 600,000 square kilometers north of Heilongjiang and south of the Xing’an Mountains.

(2) On November 14, 1860, Russia forced the Qing government to sign the “Beijing Treaty” and seized more than 400,000 square kilometers east of the Ussuri River.

(3) In 1864 and 1881, Russia forced the Qing government to sign the “Distribution of the Northwest Territories” and seized 583,500 square kilometers of land in northwest China. The Chinese territory encroached by Russia, and later the Soviet Union, totaled more than 1.7 million square kilometers!

On Dec. 9, 1999, Jiang Zemin and then Russian President Boris Yeltsin signed a Sino-Russia border agreement, which fully acknowledged a series of unequal treaties between Russia and the Qing government, and unconditionally gave away more than 1 million square kilometers of land in northeast China to Russia. As a result, the Tumen River estuary was allocated to Russia, and China no longer has an estuary to the Sea of Japan. In addition, Tuvan Uriankhai, which was occupied by the Soviet Union in 1944 without a treaty, was also given to Russia.

In July 2001, Jiang and Yeltsin decided to split the Heixiazi Island, which used to belong to China 100 percent, and gave half of it to Russia.

Jiang also signed a number of border agreements with other countries to unconditionally give away more than 500,000 square kilometers of land in northwest China to several Central Asian countries, including Tajikistan. Part of the Laoshan Mountain, Zheyin Mountain in Yunnan Province and Faka Mountain in Guangxi Province, as well as Bach Long Vi Island, the largest island among all South China Sea islands, were also unconditionally given to Vietnam by Jiang Zemin!

Altogether, Jiang Zemin surrendered 1.7 million square kilometers of land to other countries, equivalent to 47 Taiwan islands in size. How has he been able to get away with that?

Wang Youqun
Follow
Wang Youqun holds a doctorate in law from the Renmin University of China. He previously worked as a copywriter for Wei Jianxing (1931–2015), a member of the CCP Politburo Standing Committee, from 1997 to 2002.