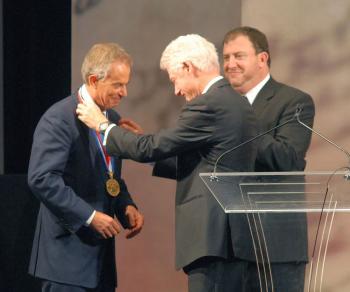 Pamela Tsai
View profile
Follow
biggersmaller
Print
Meeting none of the protests, eggs, or thrown shoes that he recently encountered in London and Dublin, former British Prime Minister Tony Blair received a standing ovation from thousands of guests on the lawn of the U.S. National Constitution Center in Philadelphia where he received the 2010 Liberty Medal.

Prior to the outdoor ceremony, Blair and Clinton had a one-hour closed-door conversation restricted to invited media and some special guests, at which The Epoch Times was present.

In the conversation, Blair discussed the trends he observed in world politics and how these translated into his view of the "special relationship" between U.K. and America.

"The single biggest thing that I've noticed is the shift of the power to the east," Blair said of China. He said that China’s sheer size in population, economy, and influence on the geopolitical landscape has made it increasingly important for the U.S., U.K. and the European Union to form a strong alliance based on "bonded values, beliefs and shared ways of life.”

According to Blair, the unified forces of the U.S., UK and European Union would allow the western hemisphere to "be at equal terms" with the rising China.

"For countries like Great Britain, it is even more important to have the relationship with America, bonded as it is by ties of not only national interests but also values, beliefs and convictions," Blair said. The same held true for European Union. "In the 21 century, if we band together with EU, we can be stronger individually. When you go to China, you say 'I am the Prime Minister of Great Britain and I am a strong ally with the U.S. and a key player with European Union.’"

Blair contended that a strong value-based alliance with America and the EU is in the best interest of Great Britain's strategic national interest.

Blair has often been criticized for closely following U.S. foreign policy, even on some unpopular issues like the war on Iraq, which greatly him cost in personal popularity at home and abroad. He showed no regret for it.

"Sometimes the Americans say ‘thank you’ for what you did for America. But actually I did it for Great Britain" Blair confessed.

The Liberty Medal was established in 1988 to commemorate the bicentennial of the American Constitution. It is an annual award given to those who "strive to secure the blessings of liberty to people around the globe.” Past recipients include Nelson Mandela, Mikhail Gorbachev, Bono and DATA (joint prize), Kim Dae Jung, Lech Walesa and Steven Spielberg.

"The award given in the founding of U.S. constitution presents some difficulty for a British Prime Minster,” Blair quipped, drawing a laugher from the audience. “I am sorry for what happened in the past." Blair said he felt a "tremendous sense of pride in human achievement" about the U.S. constitution and that he was accepting the Liberty Medal with "a great sense of privilege and deep sense of honor."

Former U.S. President Bill Clinton, Chairman of the Board of the National Constitution Center, who presented the award, commended Blair's work to "end 30 years of sectarian violence and broker a lasting peace in Northern Ireland, to stop the killing in and mass exodus from Kosovo." Blair's efforts in Middle East and Africa to promote peace and economic opportunities were also mentioned and extolled. There was no mention of his support of the U.S. war on Iraq, which is still highly controversial in the U.K.

In Blair's address, he offered seven lessons of liberty: endeavor, leadership, wanting to be free, responsibility, rules of law, tolerance of difference, and optimism.

"Liberty is not acquired by accident; it is won by endeavor. In creating liberty, there is opposition, there is even defeat and occasionally despair on the way. Liberty is about overcoming," he said, and "ordinary human beings doing extraordinary things in the mist of earth-changing events,”

Blair stressed that those who have freedom "have a responsibility, a duty and post to help those to the same freedoms that we cherish and hold dear."

"I want to see a world, and strive for such a world in which people are free to follow their religion without fear or favor, and respect those of a different faith than themselves," Blair said.