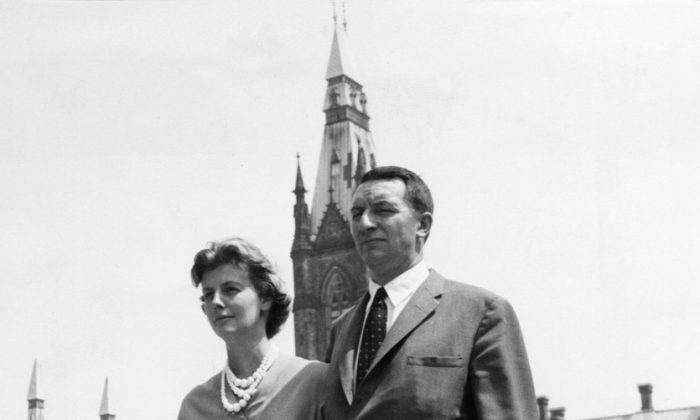 Bank of Canada Governor James Coyne and his wife walk to the Bank of Canada building after he abruptly left the Senate banking Committee hearing upon summing up his testimony, July 12, 1961. Coyne passed away Oct. 12, 2012, at the age of 102. (CP PHOTO)
US

“He was one of the greatest Canadians of his generation and the finest man I ever knew. And I was the luckiest little boy on earth,” he said via Twitter.

Born in Winnipeg, Coyne obtained a BA from the University of Manitoba in 1931 and continued his studies at Oxford University as a Rhodes Scholar to attain a BA in Jurisprudence and BCL in 1934.

He began his career by joining the Research Department of the Bank of Canada in 1938 and moved on to hold a number of different positions, including serving in the Central Mortgage Bank, the Foreign Exchange Control Board, the Canadian Embassy in Washington, and the Wartime Prices & Trade Board. He also served in the Royal Canadian Air force from 1942 to 1944.

“Mr. Coyne’s legacy has profoundly influenced all of us who work at the Bank, and has made it a stronger and more accountable institution,” Mark Carney, the current governor of the Bank of Canada, said in a statement on Coyne’s passing.