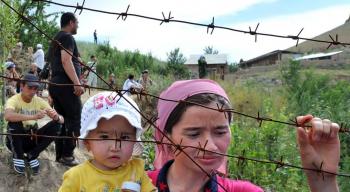 An ethnic Uzbek mother holds her daughter as they wait at the Kyrgyz-Uzbek border outside a village of Suratash on June 14, 2010. (Viktor Drachev/AFP/Getty Images)
Europe

Foreigners have been evacuated from the South of Kyrgyzstan where five days of violent ethnic clashes have left 124 people dead and almost 1,700 wounded.

Over 900 foreign students and staff of diplomatic and international missions were evacuated, said Kyrgyzstan’s foreign ministry in a statement on Monday.

U.S. State Department spokesman Philip Crowley said that the U.S. is seeking an “international response to the ongoing violence.”

According to Crowley, the violence has not interfered with operations at a U.S. military base in the country.

Tens of thousands of ethnic Uzbeks have fled to neighboring Uzbekistan.

The violent uprising started last Friday in the Southern Kyrgyz city of Osh. The exact cause of the violence remains unclear. According to Kyrgyz officials, the ethnic violence erupted after a conflict between Kyrgyz and Uzbeks at a local casino.

The self-proclaimed Kyrgyz government, which came to power in a violent coup d’état in April, has a weak influence in the South and has not been able to control the situation.

The head of the self-declared government, Roza Otunbayeva, called on Russian authorities on Sunday to send military troops to the country. So far, Russia has turned down the request.