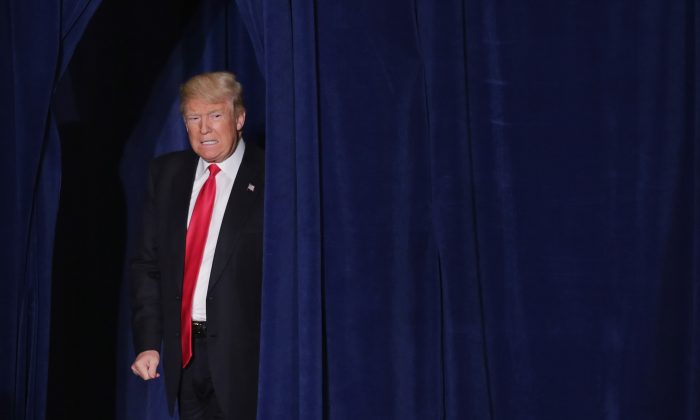 Republican presidential candidate Donald Trump walks out from backstage before delivering a speech about his vision for foreign policy at the Mayflower Hotel April 27, 2016 in Washington, DC. (Photo by Chip Somodevilla/Getty Images)
Politics

Foreign Relations Experts Were Not So Impressed by Trump’s Speech

However, some foreign policy experts say that there was a lack of specifics in his speech. As a result, Trump’s speech was panned by most experts on foreign policy and foreign relations.

CNN’s foreign policy expert Fareed Zakaria started by saying that Trump “really stuck to his guns which was populist, nationalist, protectionist,” but when he expanded the speech was “rambling to the point of being incoherent”:

Zakaria ended his statement saying, “I don’t know that it’s going to convince anyone. Certainly it didn’t strike me as a careful analytic laying out of a Trump’s foreign policy.”

That sentiment was echoed even among Trump’s allies.

Doug Bandow, a foreign policy scholar at the libertarian Cato Institute, who shares many of Trump’s beliefs about scaling back America’s role abroad, said that the speech struck him “as a very odd mishmash.”

“He called for a new foreign policy strategy, but you don’t really get the sense he gave one.”

Trump: ‘We Have to Start Being Unpredictable, Starting Now’

Robert “Bud” McFarlane, a former national security adviser to President Ronald Reagan who attended the speech said that it was “lacking in policy prescriptions,” and its “strident rhetoric masked a lack of depth.”

The Atlantic’s Peter Beinart, an associate professor of journalism and political science, in his article “Donald Trump and the GOP Tradition of Foreign-Policy Incoherence,” pointed out that “making fun of the foreign-policy speech Donald Trump gave yesterday is easy.”‘

Not everyone was so critical of the speech. High profile conservative spokesperson Ann Coulter heaped praise with a tweet sent out in all caps:

Newt Gingrich, former Senator and former presidential hopeful in the 2012 election cycle said that the speech “is worth reading and thinking about,” and correctly predicted that it would be “ridiculed by Washington elites.”

This was a serious foreign policy speech by Trump. It is worth reading and thinking about. It will be ridiculed by Washington elites.

Donald Trump retweeted the above two tweets from Coulter and Gingrich, along with others, and thanked everyone for their positive feedback, promising more details on other topics:

Thank you to all for the wonderful reviews of my foreign policy speech. I will soon be speaking in great detail on numerous other topics!