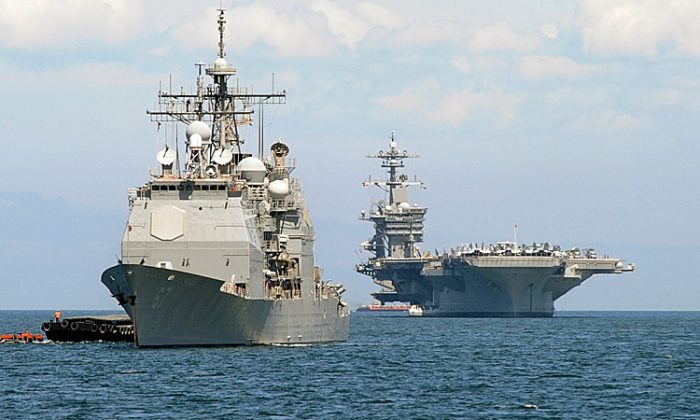 The U.S. aircraft carrier Carl Vinson (R) and the cruiser USS Bunker Hill (L) sit anchored off Manila Bay after arriving on May 15, 2011 for a four-day port of call accompanied by three other warships. U.S. carrier groups allow it to project military power in the Asia-Pacific, balancing the rising power of China, in line with a new U.S. strategic focus on the region. (Jay Directo/AFP/Getty Images)
China

In foreign policy talks between People’s Republic of China’s Vice-Chair Xi Jinping and President Obama on Tuesday at the White House, Xi may not feel he is speaking from a position of strength.

The foreign policy challenges posed for Xi, the presumptive successor to Hu Jintao as the Chinese regime’s paramount leader, by the new U.S. focus on China and the Asia-Pacific region were already complicated by the impact of events in 2011 around the world. Events last week in Chengdu, China, have made Xi’s task even tougher.

On Feb. 6 the vice-mayor and head of public security for the megapolis Chongqing in southwest China fled to the U.S. consulate in Chengdu, one step ahead of security forces sent by the city’s mayor to arrest him.

Wang Lijun spent one day at the consulate and, according to the State Department’s spokesperson, left “on his own volition.” He was promptly detained by security forces sent by Beijing, who took precedence over those sent from Chongqing.

Wang was the longtime henchman of Chongqing’s mayor, Bo Xilai. They have had a falling out, and Wang is assumed to know the secrets of Bo’s corruption—secrets that could lead to Bo’s undoing. Wang is rumored to have left behind at the U.S. consulate a stack of documents with confidential information from his time at Chongqing.

One cardinal rule observed by the Chinese Communist Party’s (CCP’s) leadership has been never to wash the Party’s dirty linen before foreigners. Wang’s very public action of going to the U.S. consulate exploded this code and willy-nilly involved the United States in the high-stakes jockeying for power inside the CCP.

When Xi shows up at the White House, he may choose to pretend the entire humiliation never happened, but nonetheless he will surely be very curious as to what exactly Wang did at the U.S. consulate.

The humiliation in Chengdu comes hard upon a year that Chinese foreign ministry officials view as having been terrible: conflicts with Vietnam and the Philippines over the South China Sea; deteriorating relations with Japan; a chill in relations with South Korea; the unexpected death of North Korean client Kim Jong-il; and, most devastating of all, the Arab Spring and the threat that its contagion of regime change may jump the border into China.

Not surprisingly, a talk given in December by Deputy Foreign Minister Le Yucheng reviewing 2011 was titled “Amid the international perfect storm, China forges ahead against uphill battles.” Le reassured his audience that China’s situation was not as bad as that depicted in the movie “2012,” which shows a global cataclysm that nearly wipes out the human race.

The bad news for the totalitarian regime only continued in January, though, as thousands of Chinese flocked to Taiwan to observe a Chinese nation holding a peaceful national election, while Chinese Internet users spent sleepless nights discussing it as though this were their own election.

At every stop during his November tour of the Asia-Pacific, Obama emphasized the United States was placing a renewed focus on the region. In January, Obama announced a new military strategy that will focus on Asia. The changes in policy clearly target China.

The P.R.C.’s official reaction to Obama’s new focus on the Asia-Pacific region has so far been defensive.

In the speech given on Feb. 7 to commemorate the 40-year anniversary of the Shanghai Communique issued at the conclusion of Nixon’s visit to China, deputy foreign minister Cui Tiankai said, “I want to emphasize our welcome to the United States to make contributions to the peace, stability, and prosperity in Asia Pacific region.”

Continued on the next page: Exposing China’s deficit in soft power