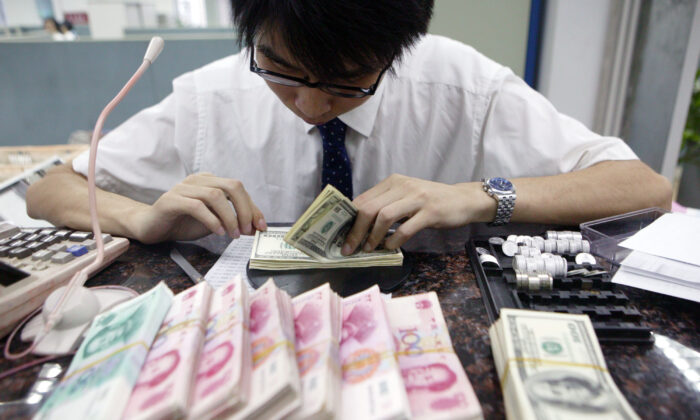 A clerk counts stacks of Chinese yuan and U.S. dollars at a bank in Shanghai, China, on July 22, 2005. (China Photos/Getty Images)
Thinking About China

China’s COVID-19 lockdowns and rate cuts are driving down the yuan and exacerbating foreign capital outflow.

“Uncertainty is really the keyword, because there’s no view, no outlook about how long this could last, and what will be next after Shanghai,” Massimo Bagnasco, vice president of the European Union Chamber of Commerce in China, told Bloomberg on May 17.

In March, Hong Kong investors sold off a record $24.2 billion worth of yuan-denominated debt. The exodus from Chinese investments is fueled by fears over China’s diminishing growth prospects, decreasing bond yield, and higher rates on U.S. investments.

At the same time that the United States and other Western nations are raising interest rates to combat inflation, China’s central bank is considering cutting rates to stimulate the economy. In April, the central bank decreased the reserve requirements from 9 percent to 8 percent in a bid to increase the money supply.

Investors are exchanging their money from yuan into dollars, which is driving up the dollar while pushing down the yuan. Over the past four weeks, the yuan spot rate has lost more than 6 percent against the dollar. UBS analysts expect the yuan to depreciate further, breaking the level of 7 to the U.S. dollar. Barclays similarly downgraded its yuan forecast to 6.9 but said the yuan could hit 7 if the lockdowns and supply chain disruptions continue.

Investors had already begun moving money out of China by 2021 because of ongoing COVID lockdowns, supply chain issues, and Chinese leader Xi Jinping’s crackdowns on numerous business sectors, including tech and education. These issues accompanied an ongoing debt crisis with high-profile companies, such as Evergrande, teetering on the brink of insolvency, as well as a general cooling of the real estate industry, which is usually a significant driver of the overall economy.

Since the beginning of this year, the Ukraine war and potential sanctions on China spooked many investors and prompted them to abandon their yuan-denominated assets. The repeated cuts of the GDP growth projections by major banks and financial institutions have exacerbated capital outflow.

On May 18, Goldman Sachs slashed its China GDP growth forecast to 4 percent. Even the slightly more bullish Economist Intelligence Unit forecast of 4.4 percent to 4.7 percent is well below Beijing’s target of 5.5 percent.

In April, Chinese stocks (.SSEC) lost 6 percent in value, and their weightings in emerging markets portfolios have dropped from their peak in late 2020 of 38.3 percent to 29 percent in April. Foreign investors divested $6.2 billion of Chinese government bonds in April, marking three straight months of sell-offs, the longest sell-off since 2015. Becky Liu, head of China macro strategy at Standard Chartered Bank Plc, hypothesized that a sharp decline in the yuan is also fueling the sales.

Despite the obvious problems in the Chinese economy, some investment bankers are still bullish. In April, Jean-Charles Sambor, head of emerging market debt at BNP Paribas Asset Management, said that in spite of rate increases in the United States and rate cuts in China, China’s bonds still offered a higher return when adjusted for inflation.

Aninda Mitra, head of Asia macro and investment strategy at BNY Mellon Investment Management, was less optimistic about China’s outlook, saying that continued rate hikes in the United States could increase the outflow of capital.

Although both the Chinese currency and the economy are apparently weakening, the International Monetary Fund (IMF) announced on May 14 that it would increase the weighting of the yuan in the basket of currencies called the special drawing rights (SDR). The yuan’s weighting went from 10.92 percent to 12.28 percent. This has been the first review since the currency was added to the basket in 2016. The dollar weighting was also increased from 41.73 percent to 43.38 percent, while the weighting of the euro, Japanese yen, and British pound declined.

The IMF decision was taken based on gains in value that the yuan has made over the past six years. However, the yuan remains an unwanted currency by investors and central banks, accounting for only 2.79 percent of global foreign currency reserves.

In response to the increased weighting in the SDR, the Chinese central bank pledged to further open its financial markets and to improve disclosure. This comes just days after Chinese authorities stopped reporting some trades by foreigners. Since May 11, China Foreign Exchange Trade System, the main bond trading platform for foreign investors, has stopped reporting on liquidations. This action may have been taken to prevent them from having to recognize that there has been a major sell-off as investors lose faith in the yuan.

In addition to the currency dropping and foreign investors steering away from China government bonds, the American and European Union chambers of commerce report that their members are pausing their China investments. Supply chain disruptions and the threat of lockdowns were the main reasons cited. While Shanghai is getting the most press coverage, at least 32 cities were still locked down as of May 13.

The lockdowns have caused numerous disruptions with wide reaching consequences. Factories have lost production days. Labor shortages and disruptions in logistics and supply chains have also occurred. Additionally, the lockdowns have shut down ports, stopped road traffic in some places, and prevented foreign employees from entering the country or visiting their China offices.

Michael Hart, president of the American Chamber of Commerce in China, told Bloomberg on May 17, that although he does not expect an immediate exodus of foreign companies, he expects China investment to decrease over the coming years.

President of the EU Chamber of Commerce Joerg Wuttke said that the higher interest rates in the United States would cause capital to flow out of China. Consequently, Beijing is expected to tighten capital outflow controls to avoid further depreciation of the yuan. In a draconian move to prevent cash from leaving the country, Beijing announced a ban on May 13 that prohibits citizens from non-essential travel outside of the country.