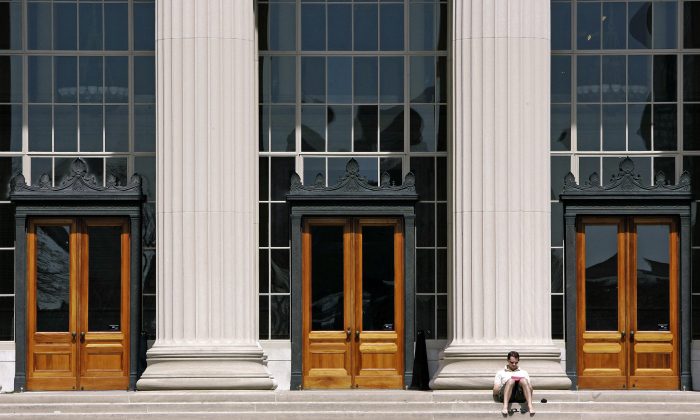 A doctoral student at the Massachusetts Institute of Technology reads outside a building at the Cambridge, Mass. campus, on April 22, 2007. (AP Photo/Michael Dwyer, File)
Education

CAMBRIDGE, Mass.—The Massachusetts Institute of Technology has offered free online courses for the last four years with one major downside: They didn’t count toward a degree. That’s about to change.

In a pilot project announced Wednesday, students will be able to take a semester of free online courses in one of MIT’s graduate programs and then, if they pay a “modest fee” of about $1,500 and pass an exam, they will earn a “MicroMaster’s” degree, the school said.

Amid the growth of free online courses, some academics predicted that it would spell the end of traditional college courses.

The new degree represents half of the university’s one-year master’s degree program in supply chain management. As part of the pilot project, students who perform well in the online half can take an exam to apply for the second semester on campus. Those who get in would pay $33,000, about half the cost of the yearlong program.

“Anyone who wants to be here now has a shot to be here,” MIT President L. Rafael Reif said. “They have a chance to prove in advance that they can do the work.”

The cost of the MicroMaster’s degree includes $150 for each of the five online classes, plus up to $800 to take the exam. The first courses will launch this winter, with plans to route about 40 students each semester from the online courses to the campus program.

Students in the supply chain management program are typically mid-career workers who take a year off work for intense training. But MIT said there’s heavy demand from companies to train more students in the field, which examines the flow of goods from manufacturer to consumer.

“We produce 40 students a year, and they say that’s a drop in the bucket; we need thousands,” said Yossi Sheffi, director of the MIT Center for Transportation and Logistics.

As free online courses have spread across the country in recent years, some academics predicted that it would spell the end of traditional courses, and perhaps the need for university degrees. But MIT follows other colleges that are merging free Web classes with a school-stamped degree.

This year, Arizona State University started offering freshman courses online for free, with the option to pay for course credit later at a cost of up to $200 per credit hour. The Georgia Institute of Technology offers an online master’s degree in computer science for $6,600, but the classes can be taken for free without credit. The University of Illinois has an online master’s degree in business using a similar model.

MIT and Harvard were seen as pioneers in 2011 when they created edX, a provider of free online classes. The idea was to spread education far and wide, snipping the tie between knowledge and academic credit. Although the pilot program will reintroduce course credit, MIT says it’s the next step along the same path.

“The new MicroMaster’s is an important modular credential for the digital age, and promises to serve as academic currency in a continuous, lifelong learning world,” Anant Agarwal, an MIT professor and CEO of edX, said in a statement. “It also affords an evolutionary path for universities in the face of mounting prices.”

For students, it’s also a new route into the university, bucking the traditional admissions system that relies on past academic records.

“That admission system works well for people who went to schools we know very well,” Reif said. “But for people from outside that familiar circle, it can be hard to break in.”

The president added that if the new model is successful, it could expand to other MIT programs. But the school also must weigh its costs.

“Right now the main focus is quality, and hopefully the finances will work out later,” Reif said. “But this is not something in which we expect to make money. We want to break even.”