For Every Dead Body Found, 5 to 10 More Out There: Texas Sheriff on Illegal Alien Deaths 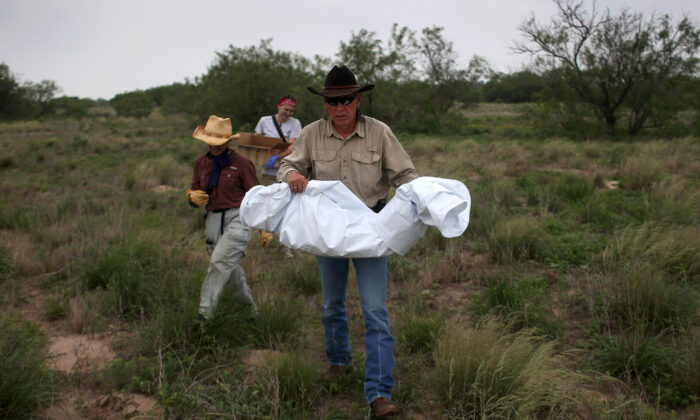 Benny Martinez, then-chief deputy of the Brooks County Sheriff's Office, carries the remains of a suspected illegal immigrant on a ranch in Falfurrias, Texas, on May 22, 2013. (John Moore/Getty Images)
By Charlotte Cuthbertson

In Texas, 70 miles north of the U.S.–Mexico border, a rural sheriff’s office spends more than 85 percent of its time on border-related issues.

Often it’s to search for illegal immigrants who have called 911 and are lost, dehydrated, or injured as they walk on private ranchland in an attempt to skirt the nearby highway checkpoint that Border Patrol operates.

Other times it’s to find a dead body.

So far this year, 79 bodies have been recovered within Brooks County’s 944-square miles, Sheriff Benny Martinez told The Epoch Times’ The Nation Speaks.

Last year, the sheriff’s office recovered 119 bodies, which was a record high. In 2020, 34 bodies were recovered.

Martinez estimates that for every body they find, another 5 to 10 are never recovered.

“I’ve spoken to a lot of mothers over the telephone, or they’ve been here in my office, crying for their loved ones that have been lost for 10, 15 years,” Martinez, a Democrat, said.

“Our terrain is real sandy. We’re about 100 foot above sea level. So once that sand starts going over that body, and that body starts getting torn apart by the feral hog, by the coyote … the only time it’s recovered is when they’re moving cattle and they turn the soil over… [and] a skull would pop up, or something. Body parts would pop up. That’s how we’re going to find out that something laid there for a while. I mean, what is compassionate about that?”

Brooks County Sheriff’s Deputy Don White volunteers his time to search for the injured and dead. Most often, he says, he finds males, aged 19 to 40, from Mexico, Guatemala, Honduras, or El Salvador.

But only about 30 percent of the bodies he finds have identification, as someone has already stripped them of their possessions, he says.

The illegal aliens trying to evade Border Patrol are known as “gotaways.” They’re the ones with criminal records or no way of gaining legal entry into the United States.

Border agents record at least 40,000 gotaways each month along the southwest border, according to unpublished data obtained by The Epoch Times.

“These people have records; they have criminal records,” Martinez said. “We have our own criminals here, we don’t need to add to that. So the fact is, we need to know who they are. And they [federal government] just don’t want to do that. They just want to let everyone in. We can’t do that.”

“The fact is that the border is not secure. And [there’s] the national security issue of all these aggravated offenders that are filtering through this brush.”

The Missing Migrants Project, which is part of the United Nations’ International Organization for Migration, started in 2014 to document the deaths and disappearances of migrants in the region.

Since 2014, the project has recorded over 2,980 aliens who died trying to cross the U.S.–Mexico border.

“Over the past two decades, the border crossing between Mexico and the U.S. has become the site of a grave human rights crisis, where thousands of people have gone missing and lost their lives during migration,” its website states.

Most of the recorded deaths are from drownings as migrants attempt to enter the United States illegally by wading across the Rio Grande.

Harsh environmental conditions and vehicle accidents are also significant when categorizing the cause of death.

“The cause of death is unknown in more than a third of recorded cases,” the website states. “Tragically, the remains of many people are never recovered and their deaths remain invisible.”

The Biden administration has broken a long-standing policy of releasing the number of illegal immigrants who die while crossing into the United States, or soon after.

Customs and Border Protection (CBP) published on its website the number of migrant deaths along the southern border from fiscal 1998 to fiscal 2020, but no figures have been posted since the Biden administration took over the agency.

Previous CBP data show 247 illegal immigrants died near the border during fiscal 2020, while 300 died in fiscal 2019.

Some reports suggest the number of deaths for fiscal year 2022 is close to 800.

The Epoch Times has made multiple requests to CBP for the missing data from fiscal years 2021 and 2022, including a Freedom of Information request. To date, the agency has failed to provide that information.

More deaths, Martinez said, are avoidable “by securing the border.”

He said it takes deputies a minimum of three to four hours to recover a body, which often leaves the county under-policed during that time.

“We’ve had roughly over 50,000 acres burned because of these immigrants that get lost or whatever. They create fire so they can get noticed, so we go find them,” Martinez said.

He said the illegal immigrants are often coming from countries that receive aid from the United States.

“Different countries are being provided funding from the United States. So why are we not holding them accountable for the funding they’re getting?” he said.