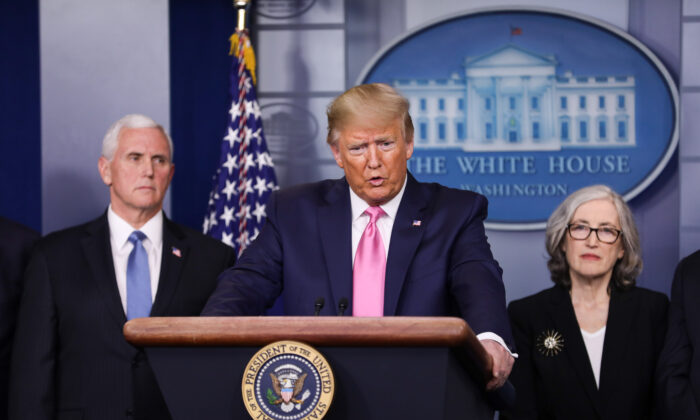 For Democrats, Coronavirus Is the New Russia … Or Is It Ukraine?

Did you know that President Donald Trump caused the new coronavirus?

I know. I didn’t either.

But Pelosi and Co. are acting as if he did.

Perhaps Trump was secretly spending time in Wuhan, China, touring their animal market and couldn’t resist sampling one of those lizards or snakes (he does like meat). Or was he negotiating with Chinese leader Xi Jinping in the secure area of their biological weapons lab and accidentally bumped into one of the test tubes?

Meanwhile, in the real world, the United States has been doing reasonably well—at least for now—containing COVID-19, only a few dozen confirmed cases and no deaths in a nation of over 330 million. (By comparison, roughly 14,000 people died from the flu in this country in the past year.) Much of the rest of the world is less fortunate.

What accounts for our success—temporary as it may be—is again anybody’s guess, but there’s at least the possibility that the administration’s moving swiftly to curtail flights in and out of China contributed in a positive way. This is the same decision the Democrats were complaining about only a couple of weeks ago as being too precipitous.

Now, House Speaker Nancy Pelosi (D-Calif.) is blaming Trump for going too slowly while Senate Minority Leader Chuck Schumer (D-N.Y.) is lambasting the president for asking for only $2.5 billion to fight the disease; he’s demanding Congress authorize and the president sign on for $8 billion, as if the virus were a lost da Vinci suddenly up for auction. (“I’ll see your $8 billion and raise you!” Maybe Mike Bloomberg should jump in.)

Also various lies were promulgated that funding for the CDC (Centers for Disease Control and Prevention) and the NIH (National Institutes of Health) was cut under Trump, when the reverse was true. It was expanded from the Obama administration.

All this while the president was in India representing our country.

What is it with these people? Why can’t they, in the face of a national—actually global—emergency, be collegial for 10 minutes. Instead, they are villainous liars.

I used to think this was good old Trump Derangement Syndrome, but that now seems too weak for what we are undergoing. The need to politicize everything on the part of the Democrats and their media friends has become a mental illness of its own beyond Trump or any single person.

The anger is too pervasive. It’s beginning to resemble an addiction. Nothing exists in and of itself, only through its political ramifications—who wins and loses?

When the Democrats move their target from Russia to Ukraine to impeachment and now to the coronavirus, it’s not only about Trump. Even more, it’s about power—personal power as manifest through the political. It comes from the depths of selfishness. Is this good for me?

Years ago, a cartoon in the pointillist style of the painter Roy Lichtenstein ran in the LA Weekly. It showed a go-getter Hollywood woman studio executive, obviously hugely distraught as she talked into the phone. Her words: “Nuclear war? There goes my career!”

The Democrats have taken this and stood it on its head. Whatever happens, it’s Trump’s fault. And if it’s not really Trump’s fault, it should be.

We’re in the midst of a truly unforeseen crisis. Will it prove to be horrific or just a sad, unfortunate stumbling block on the passing parade, forgotten in time for the Summer Olympics?

Nobody knows. But in times such as this, people reveal themselves for who they are. And what we are seeing from the Democrats isn’t pretty.

Roger L. Simon is senior political columnist with The Epoch Times. His most recent book is The GOAT. You might find it amusing in difficult times. Follow Roger on Twitter @rogerlsimon.