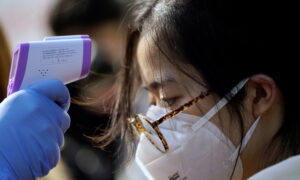 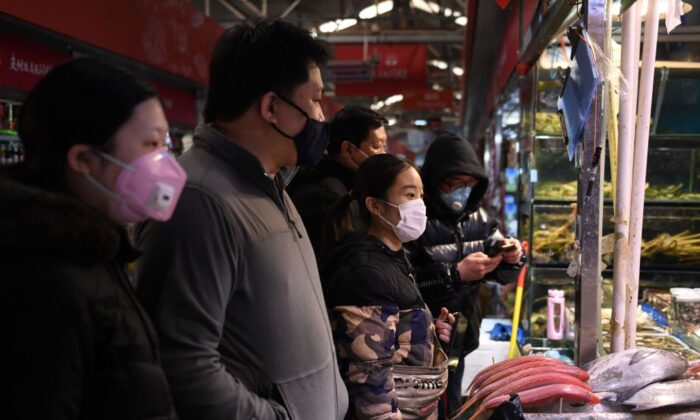 Local residents wear masks as they shop at a market in Beijing on Feb. 27, 2020. (Greg Baker/AFP via Getty Images)
Social Issues

Mr. Li, a resident of Ezhou, a city in Hubei Province, told the Chinese-language Epoch Times that locals have been rushing to buy rice for the past two days. It’s the same scene in other cities in Hubei, including Wuhan, Huanggang, and Yichang, according to social media and Chinese media reports.

Officials have stepped in to try to ease the panic. On March 31, the market regulation bureau of the municipal government in Ezhou urged, in a statement on its Weibo account, that people shouldn’t frantically buy up supplies, and assured that the city has abundant rice and oil for all its residents for a year. Weibo is a Twitter-like social media platform.

The municipal government of Huanggang also released a statement on Weibo, telling people on March 31 to stop buying up rice and oil, and saying that any information about the city facing a food shortage were rumors.

Outside of Hubei, residents of China’s Shandong and Gansu provinces also cleared store shelves of rice and oil.

A resident surnamed Chen living in Changyi city, Shandong, told the Chinese-language Epoch Times that locals have been snapping up bags of rice from stores.

The panic-buying was fueled by posts on Chinese social media claiming that some countries may soon ban food exports due to the current pandemic. That’s led to a large increase in the prices of rice and cooking oil in China.

Food security is a sensitive topic for the Chinese regime. State-run companies maintain a system of grain reserves for emergencies. China’s domestic production also can’t keep up with demand, so it imports much of its grain, including from the United States.

According to data from China’s Ministry of Agriculture and Rural Affairs, China imported 1.91 million tons of rice in the first 10 months of 2019.

Some experts have warned about a possible global food shortage amid widespread disruptions due to the pandemic. The CCP (Chinese Communist Party) virus, commonly known as the novel coronavirus, first emerged in Wuhan, the capital of Hubei Province, and has since spread to more than 200 countries and territories. More than 45,000 people outside of mainland China have died from COVID-19, the disease caused by the virus.

Last week, Maximo Torero Cullen, chief economist at the Food and Agriculture Organization (FAO) of the United Nations, stated that disruption to food supply chains could occur during April and May due to the spread of the virus.

“Uncertainty about food availability can spark a wave of export restrictions, creating a shortage on the global market,” according to a joint statement by directors-generals of the FAO, World Health Organization, and World Trade Organization on March 31.

“In the midst of the COVID-19 lockdowns, every effort must be made to ensure that trade flows as freely as possible, especially to avoid food shortage.”

In late March, Vietnam, the world’s third-largest rice exporter, halted the signing of new rice export contracts, according to Vietnamese newspaper Tuổi Trẻ, in order to ensure it had enough domestic supply.

As of press time, India and Thailand, the world’s largest and second-largest rice exporters, haven’t announced any restrictions on rice exports.

On April 2, Pimchanok Vonkorpon, director-general of Thailand’s Trade Policy and Strategy Office under the Commerce Ministry, said there was no plan to limit rice exports, given that domestic demand accounted for just 50 percent of the country’s total production, according to Thai newspaper The Bangkok Post.

While Chinese authorities have come out publicly to appease fears of food shortages, netizens aren’t convinced, after a leaked government document began circulating online. The Epoch Times couldn’t independently verify the veracity of the document.

A document labeled “classified secret” that was issued by the Linxia Hui regional government on March 28 stated that municipal and county governments must “pull out all the stops” to secure supplies of beef, lamb, cooking oil, salt, and other basic necessities, according to a Radio Free Asia report.

The document also stated that regional authorities must “guide the public to consciously stock up,” and make sure that “each household has enough food for 3 to 6 months, in case of unexpected circumstances.”