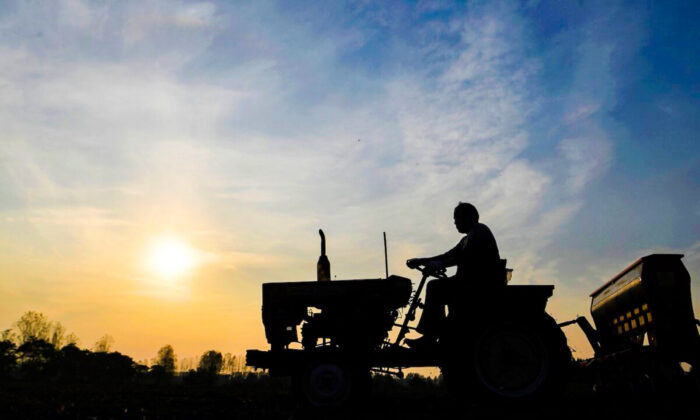 Jilin Province in China has announced that efforts will continue to ensure that spring plowing continues despite a province-wide COVID-19 lockdown, even as online videos show police throughout China interrupting farmers at work in their fields.

Fearing that a delay in spring plowing could lead to a food shortage, analysts say the crisis runs beyond fallow fields: Getting viable seeds and fertilizers is the real farming crisis.

Jilin, located in China’s corn belt, is an important processing and production region for the country’s cereals.

The authorities locked down the entire province on March 14, affecting 24 million people and threatening the national food supply.

On April 6, Jilin authorities claimed that to safeguard the spring plowing, more than 80 percent of seed sheds covering 19,768 acres of land were made ready, and more than 90 percent of corn and soybean seeds had been delivered.

However, online Chinese videos showed that farmers from various parts of the country were halted by local police for violating lockdown orders as they plowed the fields, and were subject to detention or quarantine for 14 days.

The Chinese edition of The Epoch Times was able to reach only one local seed company to confirm the official line on the readiness of seeds. The staff member said the company had been closed since the lockdown began in early March.

“In the pandemic, everyone is staying at home for the PCR test,” she said, adding that she didn’t know when business would resume.

Liu, a Chinese journalist who requested anonymity, believes the lack of viable seeds is more serious than the lockdown restrictions.

“Seeds and fertilizer are the two main things for spring plowing, he said. “But China’s viable grain seeds come at a high price.”

Many Chinese farmers have become victims of the opaque procurement practice in China, while some even had near-zero harvests because of inferior seeds, Liu said.

He said the seeds are controlled by foreign entities and are very expensive.

“The farmers no longer keep the good seeds from previous harvests like in the old days,” he said.

“Foreign companies control the technology of the seeds that come into China. Some domestic seed companies, completely out of touch with modern seed technology, even sold inferior seeds that they claimed to be self-bred seeds. As a result, the farmers had a poor harvest.”

Over the years, Chinese farmers have sustained economic losses because of inferior seeds. In one 2019 Chinese media report, a case of inferior seeds resulted in a loss of $726,000, totaling 800 acres, for 205 farmers in Jiangxi Province.

Chen Weijian, chief editor of the Chinese human rights magazine Beijing Spring, said the lockdowns would seriously affect the price and production of fertilizers and pesticides.

“Without pesticides and fertilizers, there’s no productivity in the Chinese soil,” he said.

“I believe that the food crisis in China will become more prominent in two or three years,” he said, referring to the huge loss of farmable land from years of government-led rural land expropriation.

Recently, Beijing forced rural areas to restore farm fields in various parts of China. Some local officials responded to the latest policy by burying basketball courts and roads under layers of soil on cement to create arable land.

Chen said that’s an indication that the food shortage has reached an embarrassing point for Beijing.