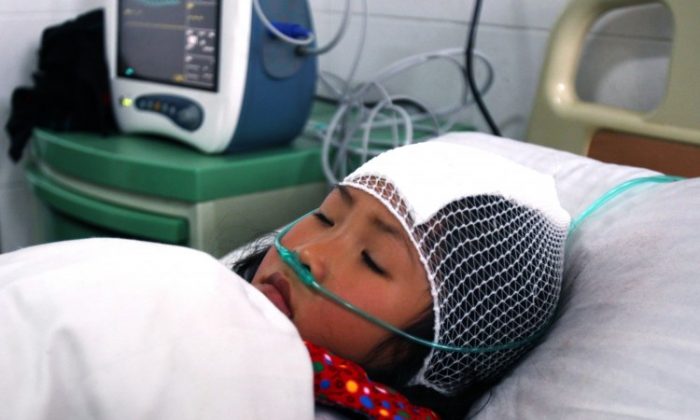 A girl lying on a hospital bed after she was stabbed during a knife attack that took place, on Dec. 14, at a primary school in Guangshan county, central China's Henan Province. (STR/AFP/Getty Images)
China

Focus on U.S. Massacre Over China Slashing Angers Many

The difference in attitude that China’s state-run media has taken towards the recent U.S. school shooting incident, and the Henan school slashing incident where 22 children were wounded, has enraged Chinese netizens.

On Dec. 14, 36-year old Min Yingjun reportedly attacked and wounded 22 elementary school students and 1 adult with a knife, until he was overwhelmed and arrested by local police and villagers. One of the students had his fingers cut off, and another received a severe wound close to his brain.

“Two similar incidents happen on the same day, and yet the U.S. shooting steals the headlines on CCTV. This country never ceases to amaze me,” commented a netizen from Zhejiang.

After the shooting, President Obama publicly mourned the deaths of its victims and ordered U.S. flags to be flown at half-staff. This act of solidarity was compared by Chinese netizens to the reaction of the Chinese authorities to the Henan tragedy.

“Our leaders said nothing, and our red flags are still flying high. Are the lives of the children of our country really worth so little?” Guangdong netizen Yao Hongwei asked his 10 thousand followers on Weibo.

“CCTV devoted an entire afternoon to providing in-depth analysis of the mass shootings that took place in the U.S: The number and the causes of these horrific massacres, possible solutions to the problem, estimations of the number of guns, potential risks, condemnation of President Obama… If you’re all so professional, so responsible, and so serious about news reporting, why couldn’t you even make a single report on the man from Henan who injured 22 students with a knife?” Weibo opinion leader “Notebook” said to his more than 4 million followers on Dec 15. The comment was forwarded over 149,000 times.

The Henan incident was finally reported by official Chinese media Xinhua News Agency on Dec. 16, two days after it had taken place, and after netizens had already heavily criticized the state-run media.

According to the Xinhua report, the Guangshan Propaganda Department had released a statement at noon on Dec. 14, announcing that a news conference would be held at 9 a.m. on Dec. 15. However, the statement was abruptly pulled from its official website that very evening, followed by an announcement that the news conference was canceled.

The department also imposed a simultaneous information blackout on the incident, and within two days, all of Guangshan’s government officials were avoiding questions on the topic.

On Dec. 15, a self-proclaimed low-level official, who was later confirmed to be a deputy director from the education department at Guangshan, told a Xinhua reporter that “all the department heads have gone to the countryside to investigate.” He, meanwhile, was found playing a computer game.

The reporter also approached the head director of the Guangshan Propaganda Department, and asked him to confirm news circulating the Internet that “The Propaganda Department announced that the suspect is mentally ill.” He merely responded that it would take more time to verify if the suspect did indeed have a psychological problem, and told the Xinhua reporter, “What’s the point in discussing this, let’s go eat first!”