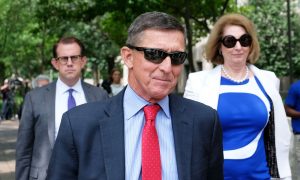 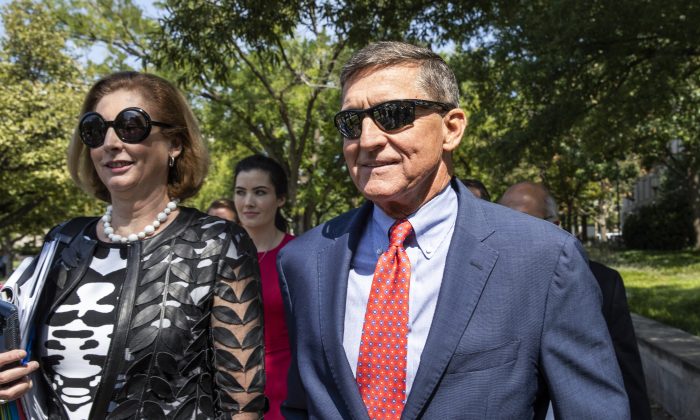 WASHINGTON—The defense team of Lt. Gen. Michael Flynn, a former adviser to President Donald Trump, is pursuing an avenue that could reveal information crucial to discovering the basis—or lack thereof—for the Obama administration to surveil Trump campaign aides—a matter that has come to be known as “Spygate.”

Former prosecutor and Justice Department critic Sidney Powell has led Flynn’s team since June, when he fired his previous lawyers. She’s alleged that the government has been withholding information from Flynn that would have been helpful to his defense, a violation of the so-called Brady Rule.

If not for this failure to provide information, Flynn would have never pleaded guilty to the process crime of lying to the FBI, she said during a Sept. 10 hearing at the federal district court in Washington.

On Sept. 11, Powell filed a redacted version of an earlier sealed motion (pdf) asking U.S. District Judge Emmet Sullivan to make the government hand over a wide range of documents. Many of the documents relate to the investigation the FBI had opened on Flynn, “based on his relationship with the Russian government” sometime prior to Dec. 30, 2016, as stated in the final report of former special counsel Robert Mueller (pdf).

It seems it was this investigation that led two FBI agents, Special Agent Joe Pientka and then-Deputy Assistant Director Peter Strzok, to go to the White House on Jan. 24, 2017, and interview Flynn. And it was Strzok’s report from this interview—a 302 form—that served as the basis for the accusation that Flynn lied to the agents.

It appears that Powell aims to show that the FBI never had a proper reason to suspect Flynn of being an agent of Russia to the point that it was necessary to open a counterintelligence investigation on him and thus, the FBI had no proper reason to interview Flynn in the first place. But her job may, in fact, be easier. She only needs to show that the government failed to hand over to the defense information that puts in question the FBI’s reason to interview Flynn. Withholding information helpful to the defense is a Brady violation and the judge may dismiss the case on such grounds.

If the judge obliges Powell’s request, the government may be forced to hand over a trove of documents that could shed light on many blank spaces in the Spygate saga.

In addition to other information, Powell is asking for “all documents, reports, correspondence, and memoranda, including any National Security letter or FISA application, concerning any earlier investigation of Mr. Flynn, and the basis for it.”

National Security letters and FISA applications are used by the government to justify its spying on U.S. citizens.

It was Steele who produced the dossier of unverified and/or unsubstantiated claims about supposed Trump-Russia collusion that was then used by the FBI to obtain a FISA warrant on Trump campaign aide Carter Page.

Steele was paid for the work, through intermediaries, by the Democratic National Committee and the presidential campaign of Trump’s opponent, former Secretary of State Hillary Clinton.

Powell also wants “all transcripts, recordings, notes, correspondence, and 302s of any interactions with human sources or ‘OCONUS lures’ tasked against Mr. Flynn since he left DIA [Defense Intelligence Agency] in 2014.”

OCONUS is an abbreviation for “Outside the Continental United States.” A “lure” is a counterintelligence term for a person used as bait, possibly to be recruited by a foreign intelligence service and then used as a double agent.

“You get all our oconus lures approved?” Strzok texted to his mistress, high-ranking FBI lawyer Lisa Page, on Dec. 28, 2015.

It’s not clear for what purpose Strzok sought the lures.

The Strzok-Page texts, uncovered sometime in mid-2017, showed they held animus toward candidate and later President Donald Trump and preference for Clinton.

Powell pointed out that before Flynn pleaded guilty in December 2017, he was only told about the existence of the texts, but wasn’t given access to them.

Powell also is requesting “all payments, notes, memos, correspondence, and instructions by and between the FBI, CIA, or [Department of Defense] DOD with Stefan Halper—going back as far as 2014—regarding Michael Flynn, Svetlana Lokhova, Mr. Richard Dearlove (of MI6), and Professor Christopher Andrew.”

These documents relate to a May 23 lawsuit, in which Lokhova, a Russian-born UK-based historian, alleged that Cambridge academic Halper, who was de facto outed as an FBI informant snooping on Trump campaign aides, fed lies to the media about her supposed relationship with Flynn.

Since late 2016, legacy media outlets ran a number of articles that apparently left many people with the impression that Lokhova was a Russian spy who somehow got access to a high-level meeting in 2014, at which she approached Flynn and engaged him in a relationship, or possibly an affair, on behalf of Russian intelligence.

The articles drew on unidentified sources, which the lawsuit alleges were Halper and Andrew, a Cambridge professor and official historian of MI5, the United Kingdom’s domestic counterintelligence and security service.

Lokhova said she was invited to the 2014 meeting by Andrew and Dearlove, former head of the UK’s MI6 intelligence service. She said she was never alone with Flynn. She gave a presentation on some public materials she collected years prior from the Russian state archive for her master’s studies at Cambridge. Flynn asked her to send him some of the materials. She sent him several emails with Andrew copied on all of them, the suit said.

Powell told Fox News on Sept. 10 that an internal Justice Department memo said, “they had exonerated Flynn of any sort of Russia violation as of Jan. 30, 2017”—less than a week after his FBI interview.

She’s requesting that the government produce the memo too.