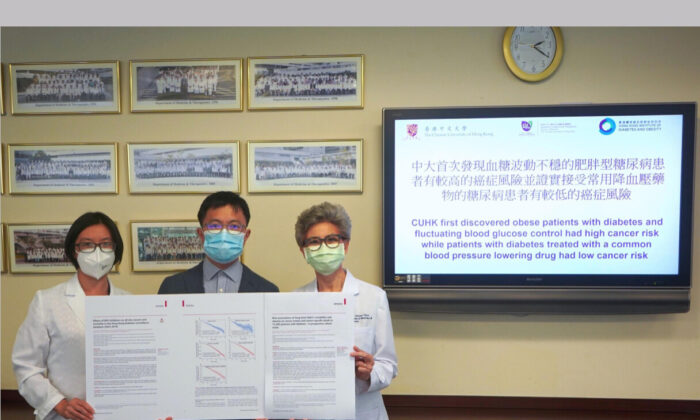 The CUHK research team found that people with diabetes and overweight or obesity problems have a 50 percent increased risk of cancer if their blood sugar levels fluctuate. ( CUHK Communications and Public Relations Office)
HK Current Affairs

Diabetes, one of the most common urban diseases, often has many subsequent complications, and cancer is one of the causes of death in diabetic patients. The Chinese University of Hong Kong (CUHK) research team found that people with diabetes who are overweight or have obesity problems have a 50 percent increased risk of cancer if their blood sugar levels fluctuate and that diabetics who use renin-angiotensin-system inhibitor (RASi) as a blood pressure lowering drug have a 50 percent lower risk of developing cancer compared to non-users.

According to statistics, there were 537 million people with diabetes worldwide in 2021. In Hong Kong, one in every eight adults has diabetes, and with a rising trend in young people. Studies have shown that diabetes can lead to complications such as heart disease, stroke and cancer, with cancer being one of the leading causes of death.

Juliana Chan Chung Ngor, Professor of Medicine and Therapeutics, Faculty of Medicine, Chinese University of Hong Kong (CUHK) and Director of the Hong Kong Institute of Diabetes and Obesity, said that patients with suboptimal control of diabetes, had an abnormal internal environment such as low-grade inflammation which could promote cancer growth 1.3 times higher than those without diabetes.

The CUHK team studied the trends of diabetes and its complications by analyzing the information of the patients who were followed up at the Prince of Wales Hospital, Hong Kong and Hong Kong Diabetes Surveillance Database. It was found that patients with fluctuating blood glucose control had a higher risk of cancer than those with stable blood sugar.

The team used glycated haemoglobin (HbA1c), a percentage index of red blood cells in the body which are covered by glucose, to study blood sugar fluctuations in patients and calculate the HbA1c Variability Score (HVS).

Another study led by Yang Aimin, Research Assistant Professor in the Department of Medicine and Therapeutics, Faculty of Medicine, CUHK, found that a class of blood pressure lowering drug could reduce the risk of cancer in patients with diabetes.

Elaine Chow, Senior author of the paper and Assistant Professor in the Department of Medicine and Therapeutics, Faculty of Medicine, CUHK, said that high blood glucose, low grade inflammation and signals secreted from fat cells can activate angiotensin II (Ang II), a potent hormone which can increase blood pressure and stimulate cell growth.

RASi reduces the activity of Ang II and has been confirmed to reduce the risk of heart disease, stroke and kidney failure in patients with diabetes.

The new data from the research suggested that this RASi might lower cancer risk possibly by reducing the harmful effects of Ang II on cancer growth.

The two CUHK studies highlighted the importance of glycemic and weight control for diabetics, as well as the early use of organ-protective drugs, such as RASi, to reduce the risk of fatalities, including cancer, especially in young patients facing a long-term disease course, helping to keep them away from the risk of cancer and its risk of death.