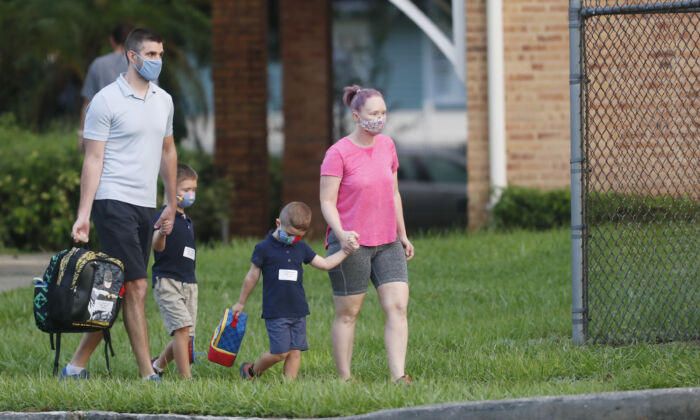 PUNTA GORDA, Fla.—Broward County School Board members on Tuesday voted to keep the county’s school mask mandate in place to not allow parents to opt out of the requirement.

A lone board member, Lori Alhadeff, voted no because the mandate did not give parents a way to opt out if they believe that’s best for their children.

Alhadeff had initially indicated she was willing to support keeping a mask policy as long as parents had a way to opt out. But the board voted to keep the mandate and only allow medical opt-outs.

The board held a nearly four-hour meeting on the mask mandate on Aug. 10. The discussion was sometimes heated and explored a number of “what if” scenarios, most having to do with the consequences from the governor’s office if the school board defied the governor’s executive order, which had left the decision on mask-wearing up to the parents.

In a speech before the board on Tuesday, Ft. Lauderdale National Association for the Advancement of Colored People (NAACP) President Marcia Ellison applauded the board’s decision on July 28 to institute a mask mandate for children and staff in the county’s schools.

“Don’t be bullied by a governor who is playing Russian Roulette with our children’s safety,” she told board members.

The board also voted to seek outside legal counsel to challenge DeSantis’s rule and explore the possibility of filing a lawsuit.

The school board’s interim general counsel, Marylin Batista, reminded the board that they had sworn an oath to uphold the laws of the state, and that defying the governor would put the board members in violation of the oath.

Batista’s recommendations were to challenge the executive order but follow it until a court rules on the challenge.

Interim Broward Schools Superintendent Vickie Cartwright said she would follow the recommendations of the board even though they run afoul of the executive order.

“These board members did not take this decision lightly,” Cartwright said in a press conference after the meeting.

Board member Laurie Rich Levinson said that her number one priority was to keep children in schools because of learning loss as a result of online instruction during the pandemic. Standardized test scores have declined statewide, according to results released this year.

“We should be strategizing on learning loss, and we are spending our time on masks,” Levinson said. “I say choice ends when infringement begins.”

“I am deeply disturbed being threatened by the governor,” she said in the meeting. “This is voter suppression–suppressing a board that was voted on by the people–my people. I’m not going to risk their lives because I’m being threatened.”

Osgood was responding to a letter from Florida Department of Education Commissioner Richard Corcoran, who said he was opening an investigation into whether Alachua and Leon county school boards violated the governor’s order on giving parents a choice on whether their children should wear masks in schools.

The Florida health and education departments approved a rule last week designed to prop up the governor’s executive order on parental choice. One of the provisions of the rule gave parents the right to opt their children out of school mask mandates by submitting a written note or form to the school. The school boards voted to adopt that rule, except the provision giving parents the right to opt out, with an exception for medical reasons.

In letters written by Corcoran obtained by the Epoch Times, the commissioner had warned the superintendents and board chairs that he planned to withhold funds in the amount equal to their salaries.

Corcoran explained the rule at length to the superintendents and board members.

“The Florida Surgeon General, Dr. Scott Rivkees, is explicit in [his] expectations for ensuring that any mask mandated policies imposed by a district or school must allow for a parent or legal guardian of the student to opt out the student from wearing a face covering or mask,” the letter reads. “The emergency rule does not require parents to submit medical documentation from a physician or a nurse practitioner in order to opt out and any such requirement is inconsistent with the emergency rule.”

Christina Pushaw, a spokeswoman for Gov. Ron DeSantis, said in a written statement that the decisions of these school boards “violate the spirit of the executive order.” She added that the threatened financial penalties for non-compliance was not directed at students.

Broward County Schools is the sixth largest school district in the country, serving more than 240,000 students and employing more than 30,000 people.

Counties around the state are complying with or defying the governor’s order. Lee, Hillsborough, and Duval are requiring parents to opt out, according to a tally compiled by edefinED. Meanwhile, Manatee, Sarasota, and Pinellas counties made no changes to their policies and are following the directives of the governor.

Leon county mandated masks for K-8 student grades, likely because there are no vaccines available for children 12 and under. Jacks and Nassau counties made masks “encouraged” or “optional” in schools.

Private schools, such as the Diocese of Venice, are not included in the governor’s executive order because they do not receive state funding and can write their own policies. The diocese is choosing to mandate masks for its 5,000 student across 15 schools.

DeSantis dug his heels in on Tuesday with regard to mask mandates, arguing there is no data that masking children helps deter the spread of the virus.

“Now, there’s an attempt to say that the Delta variant has changed a lot with respect to kids,” DeSantis said at a press conference in Surfside. “Here’s what I can tell you. If you look throughout the entire pandemic, between 1.1 and 1.4 percent of COVID-positive patients in Florida hospitals have been pediatrics. And right now, it’s 1.3 percent, so you have not seen a change in the proportion of the young people who end up being admitted.”

He also doubled down on protecting parents’ rights to choose what they believe is best for their children.

“We think it’s ultimately the parents’ decision. We think that this is something that intimately affects the health and well-being of young kids,” he continued.

“We had a whole year to watch how this has developed in Florida, throughout the United States, and throughout the world, and I can tell you, in Florida, we had school districts that mandated it last year, others that didn’t. Same with private and charter, and there was no statistical difference.”