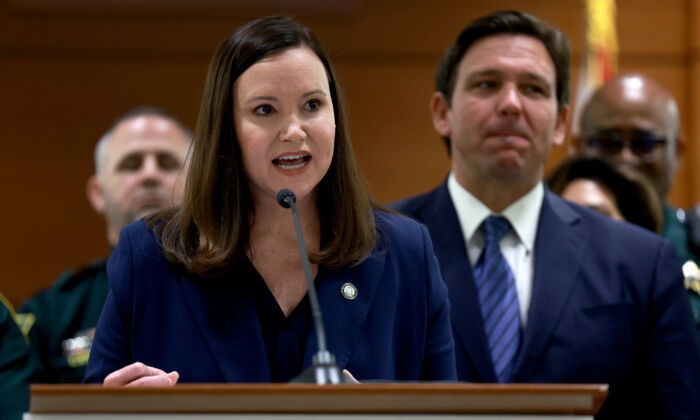 A grassroots group presented evidence to Florida election officials and law enforcement last week showing that almost 1,100 mail-in ballots in one county were cast from undeliverable addresses in the state’s Aug. 23 primary election.

Florida First Freedom Alliance gave state election officials a spreadsheet containing the results of a computer crosscheck conducted by another grassroots group. That audit represents “only a small sliver” of those who requested mail-in ballots in Florida’s Orange County, according to Christopher Gleason, the group’s spokesman.

The data allegedly show that almost 1,100 vote-by-mail ballots were sent to and cast from undeliverable addresses.

“The resulting problem is that there are thousands of completely undeliverable vote-by-mail ballots that were later turned in to election officials as legitimately cast vote-by-mail ballots,” Gleason told The Epoch Times. “This is what happens when dirty voter registration rolls result in massive numbers of undeliverable ballots. The question is, who is voting them?”

The Orange County Supervisor of Elections Office didn’t respond to a request for comment by press time.

“There are thousands of people across Florida listed on the voter rolls whose address is flawed with either incomplete or inaccurate information—missing a digit in the zip code; an apartment complex with inaccurate, incomplete apartment numbers or none at all; and misspelled words. Small errors, but just enough to render a mail-in ballot undeliverable,” Kris Jurski, spokesman for the Lake County group, told The Epoch Times

“The whole game is to generate undeliverable ballots—a portion of which are somehow being obtained and voted by somebody else.”

After analyzing the July voter rolls, Jurski’s group informed Florida elections officials that in just one of the state’s 27 U.S. congressional districts (District 11) nearly 60,000 residential addresses were in need of updating and correction.

The group found more than 30,000 residential addresses that were designated by the U.S. Postal Service as undeliverable.

Jurski said there were thousands of address splits in which voters had their addresses temporarily altered in 2020 and that the practice continues today.

“Performing the switch is how an unauthorized actor could get a person’s mail-in ballot without his or her knowledge,” he said. “This may be why there are so many obviously faulty addresses kept on voter registration rolls.”

It may also explain the experience reported by many in-person voters who showed up at their polling places to vote on election day and were told by election workers that they had already voted, according to Jurski.

“Thousands of these ballots are being voted by someone—then just in time for the election, the addresses are electronically switched back, making the scheme all but undetectable by local election officials,” he said. “This is classic identity theft.”

Jurski said the voter’s name, ID number, house number (but not his street name), and all other information in his voting records remain the same on the registration rolls.

He said the switches are done in low volume over a wide area of jurisdictions and that there’s less such activity during primaries because fewer votes are needed to impact the outcome of races than in general elections.

“Many elections in Florida are decided by less than 1 percent or even by just a handful of votes, so the situation is very concerning.”

Jurski told The Epoch Times that a citizens’ canvass of 12th Street in the city of Clermont in Lake County that was conducted on Aug. 27, just days after Florida’s Aug. 23 primary election, found that residents were completely unaware of a switch that was made to their voter registration records.

Without their knowledge, request, or assent, all of the 12th Street voters surveyed had their addresses electronically changed to say Red Belly Road and then changed back again weeks later.

“We obtained 37 sworn affidavits from the 37 people registered to vote on 12th Street attesting that they never requested a change of address,” he said.

“A married couple residing on 12th Street showed us two voter information cards displaying their names and inaccurately listing them as living on Red Belly Road.”

Alan Hays, supervisor of elections in Lake County, told The Epoch Times in a Sept. 5 phone interview that he was aware of the 12th Street incident.

Hays, a Republican, said he wants to assure people that every change on the Lake County voter rolls was made by “authorized personnel, either directly employed by Lake County or contracted with it.”

“We are not in violation of any law,” he said. “We completely follow the letter of the law.

“I don’t question the intent of the citizens’ groups. In fact, I share their desire for pure and clean elections.”

Hays said the 12th Street changes (to Red Belly Road and back to 12th Street again) resulted from the U.S. Postal Service referring to the block as 12th Street, while the Lake County E-911 System calls the same thoroughfare Red Belly Road.

“As we were in the process of making our precincts coincide with newly redrawn district lines, the consultant we employed used the E-911 designation of Red Belly Road instead of the name 12th Street,” he said. “Our office chose to use the E-911 Geo Point Data System for our redistricting work.”

Greg Holcomb, director of public safety support and 911 coordinator for Lake County, told The Epoch Times: “We have never referred to 12th Street in Clermont as Red Belly Road. It has never been named Red Belly Road.

“There was a 12th Street in the Wekiva Falls RV Resort that was renamed Red Belly Road, but that was in Sorrento and has nothing to do with the 12th Street in Clermont. They are on opposite ends of Lake County.”

In all but the above-mentioned case of the married couple’s voter information cards, the postal service considered the block residents’ mail undeliverable if it bore the Red Belly Road address.

According to Jurski, the long-time personal acquaintance between the couple and their mail carrier may have been a factor in their receiving the misaddressed envelopes containing the inaccurate voter information cards.

In his letter to election officials, Gleason wrote that the existing safeguards provided by Florida law to prevent the misuse of mail-in ballots are being ignored by many county election supervisors.

He pointed to a Florida law governing mail-in ballot procedures that reads, in part, that “ballots shall be addressed to each elector at the address appearing in the registration records and placed in an envelope which is prominently marked Do Not Forward.”

Florida First Freedom Alliance provided election authorities with screenshots of mail-in ballot envelopes that were sent out to voters that don’t bear what they allege to be the statutorily required instruction: “Do Not Forward.”

Instead, the envelopes only read, “Return Service Requested.”

“That is a clear violation of the plain language of the law,” Gleason said. “Specific words have specific meanings in the law and in postal regulations.”

As evidence of the problem, Gleason’s group provided authorities with a screenshot of a vote-by-mail ballot envelope that had been forwarded in Pinellas County.

Evidence of similar occurrences in other Florida counties, such as Pasco, has also been sent along to election officials.

Dustin Chase, deputy supervisor of elections in Pinellas County, disagrees that the envelopes used by his office violate the statute.

“From our perspective and that of our attorneys, we are conducting elections legally pursuant to all laws,” Chase told The Epoch Times.

He described Gleason’s group as “a very sincere group of patriots that is dedicated to ensuring the integrity of our elections. We respect them.”

However, Chase said the group doesn’t understand that the section of the Florida election law that it’s citing applies only to “all-mail-in elections,” such as referendums, where no candidates or offices appear on the ballot and there’s no in-person voting.

Gleason said the plain statutory language governs the handling of mail-in ballots in all elections.

He also said the same statute mandates that mail-in ballots be sent by First Class mail, yet his group found that many mail-in ballot envelopes are sent by bulk mail or nonprofit mail.

He also presented evidence that a large number of mail-in ballots were sent to voters in apartment houses or complexes with no individual apartment numbers specified, a practice which he says opens the door to potential voter fraud.

When Chase was asked by The Epoch Times about mail-in ballots being cast from undeliverable addresses, he replied: “I’m not sure if it did happen, but if it did and someone knows about it, they should report the fraud to law enforcement immediately.”

Gleason and his group are awaiting the response from state and local election officials to their letters and are willing to help them clean up the problems.

He criticized the hesitancy of some election officials to cooperate with concerned citizens.

“We are often told that data we request is nonexistent or that we don’t have a right to see it. They also tack on exorbitant fees to some requests,” Gleason said.

Jurski said his group is running into the same resistance from election authorities.

“Our problem is not with the honest, hardworking, conscientious election workers. It is with their superiors,” he said.

On Aug. 25, The Epoch Times contacted Mark Ard, director of external affairs for the Florida Department of State, with a list of questions and a request for comment on the citizens’ allegations.

Ard acknowledged receipt of the email but didn’t respond by press time.

Moody said even a small number of such votes can be impactful, citing a congressional seat that was won by only five votes.

She referred to a poll that found that just one in five Americans believe our elections are “very secure.”

“Government cannot stand without the trust and confidence of our citizens,” Moody said.

At the same press conference, Florida Gov. Ron DeSantis, a Republican, pledged that the state would investigate and arrest violators of election law.

DeSantis focused his remarks on voters who voted in two different states and on foreign nationals who get registered to vote and are voting in Florida elections.

“It would be easier if we had the cooperation of the Department of Homeland Security,” DeSantis said. “The federal government has not been working closely with us. Their interests lie elsewhere.”