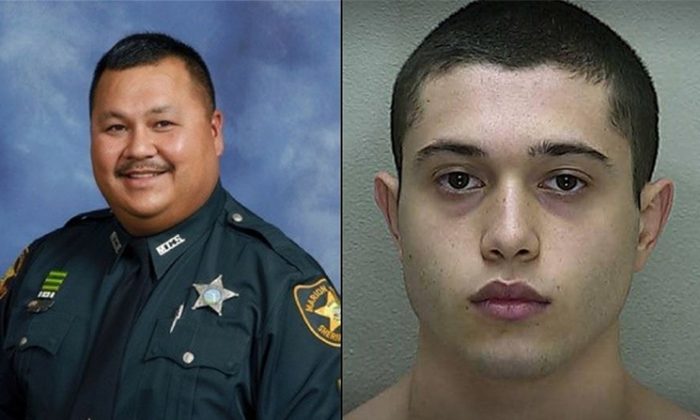 A teenage gunman who allegedly shot one student at a Florida high school was apprehended by the school resource officer before he could hurt anyone else.

Deputy James “Jimmy” Long of the Marion County Sheriff’s Office arrested former student Sky Bouche 19, after Bouche fired a shotgun under the door of a classroom, striking a student.

Bouche, currently living in Crystal River, had been a student at Forest High School in Ocala, Florida. He returned to his alma mater on the morning for Friday, April 20, bringing with him a short-barreled shotgun concealed in a guitar case.

Bouche fired a single blast under the door of a classroom, the Ocala Star-Banner reported. Pellets struck one student in the ankle.

Long “did not hesitate. He went right in,” Wood said at a news conference.

Fewer than three minutes elapsed from the first report to Bouche’s arrest.

The 17-year-old student who was injured was hospitalized with a nonlife-threatening wound in the ankle. He was in good condition Friday night, the Ocala Star-Banner reported.

As he was being led out of the school in handcuffs, Bouche told reports “I didn’t shoot anyone.” When asked what he would say to his victim, Bouche replied, “Sorry,” followed by, “it’s not going to make it better anyway.”

After firing the single shot, the Banner-Star reported, Bouche dropped his weapon.

“He wanted to be arrested,” McManis-Panasuk told the Banner-Star. “I really don’t think he meant to shoot the gun. I think it really was an accident. He just wanted someone to listen to him.”

Students at Forest High had planned a walkout, but then cancelled it after the incident Friday morning.