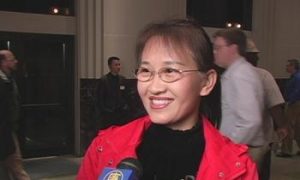 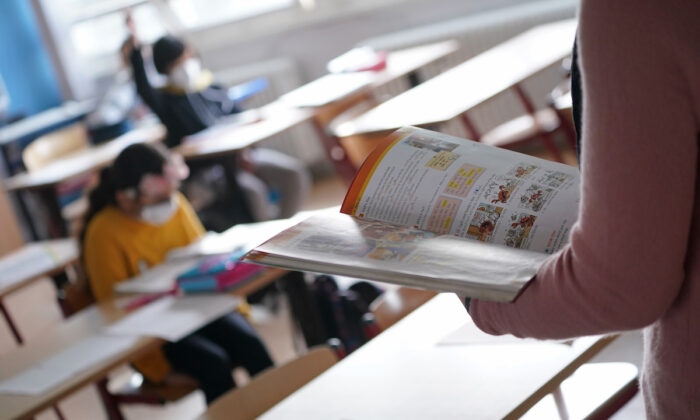 A teacher leads an English class on the first day the children were allowed to return this year for in-person classes at a school during the coronavirus pandemic in Berlin, Germany on March 9, 2021. (Sean Gallup/Getty Images)
Florida

A lawsuit has been filed against Broward County Public Schools (BCPS) in Florida after two public records requests were denied regarding a list of 42 books that the requestor believes have “very pornographic” content that may be available to children as young as 4 years old.

“The lawsuit was filed reluctantly but we had to say to Broward County that we need this information,” Rick Stevens, one of the founders and co-managing directors of Florida Citizens Alliance (FLCA) and pastor of Diplomat Westland Church in Cape Coral, Florida, told The Epoch Times. “It is public information and, since the first part of June, we have been trying to get them to respond.”

FLCA is the organization that requested the information from the Broward school district.

“We want to know what materials they have in their media centers and libraries,” Stevens said, explaining that the two months of delays and excuses they faced to find simple answers begs one question: “What are they trying to hide?”

“The truth is, the school district is stonewalling,” Alexander Bumbu of Pacific Justice Institute (PJI), explained to The Epoch Times. “That’s why the lawsuit was necessary. We wanted to know if they’re hiding something and we’re very concerned that they are possibly exposing kids to inappropriate stuff.”

“PJI is one of the largest, faith-based, non-profit legal defense firms in the country with offices from coast to coast,” Bumbu said. “Since our founding in 1997, PJI has been a beacon for parental rights. In that role, PJI represents FLCA, a parental rights organization, which informs parents about potentially pornographic materials in their government schools. FLCA compiled a list of books and hired PJI to file a public records request to learn if Broward County Public Schools possesses any of those books and which schools those books are located in.”

A similar request, with a different list of books, was made to BCPS and other Florida school districts in 2019. At that time, BCPS admitted to having 82 percent of the listed books.

“That is a fact that BCPS would no doubt be embarrassed about now,” Bumbu attested. “Under Florida law, BCPS is responsible for monitoring the materials in its schools. Floridians have a clear right to see those materials. FLCA is doing what any parent would do if they were concerned about what his or her kid is being exposed to in school.”

“One of the books on the list that FLCA submitted in 2019 has a drawing of a naked woman bent over forward holding a hand-held mirror to examine her genitalia,” Bumbu explained, calling the first time he saw the image “a jaw-dropping experience.”

“BCPS admitted in 2019 to having this book in some of their schools, including an elementary school,” Bumbu added. “If you can’t be shown these images on your evening news, they should not be shown to your kid in school.”

BCPS officials didn’t respond to a request by The Epoch Times for comment.

The image described by Bumbu is in a book titled “It’s Perfectly Normal,” recommended on Amazon for children “10 and up” in grades 5 to 8. Another image in the book depicts a man and a woman engaged in sexual intercourse.

“It’s Perfectly Normal” wasn’t on the 2021 list of books submitted to BCPS by FLCA, so FLCA doesn’t know if that book is still being made available to 10-year-olds.

“In the end, they still didn’t provide all of the information I asked for,” Bumbu noted, explaining that BCPS is still withholding exactly where in the schools the books they admit to having from the 2021 list are located: media centers, instructional materials, supplemental materials, or reading lists.”

“The foot-dragging Broward County Public Schools put me and Florida Citizens Alliance (FLCA) through an eight-week-long saga and odyssey into the bureaucratic abyss,” Bumbu lamented. “BCPS finally provided me with a list Thursday, three days after I filed the lawsuit, but they didn’t provide all of the information I asked for.”

For those who aren’t concerned with children as young as 4 years old being exposed to books showing or talking about people engaged in sexual acts, Bumbu believes the two months of stonewalling by BCPS should still be a matter of great concern.

Keith Flaugh, managing director of FLCA, said advocates of the inappropriate material are trying to accuse his organization of trying to “ban books.”

“We’re not banning books,” Flaugh told The Epoch Times, explaining they are trying to prohibit the availability of inappropriate materials to minors. “It’s not banning books any more than it’s banning guns or drugs from school property. These are harmful materials and our public schools have no place distributing or allowing them.”

“These books are sexually explicit and age-inappropriate,” Flaugh insisted, “and books like ‘It’s Perfectly Normal’ are very pornographic.”

Books such as “Sex, Puberty and All That Stuff,” on the 2021 list of inappropriate books, teaches minor children aged 11 to 16 all about erections and their alternative names: “stiffy, hard-on, and boner.” “This Book is Gay” (also on the 2021 list) provides minor children aged 14-17 detailed instructions—including explicit drawings—on how to have “boy-on-boy” and “girl-on-girl” sex.

The most popular of the nine books is a young adult (YA) novel by Judy Blume called “Forever,” originally published in 1975. According to Amazon, the recommended grade level for this book is “nine and up.”

“Nothing is glossed over: sexually transmitted infections, abortion, contraception and periods,” reads James Dawson’s review of the book for The Guardian in 2015. “What’s startling when reading ‘Forever’ in 2015 is how modern it feels. The cherry on the cake is potentially gay character Artie. Yes: LGBT+ characters in a YA novel from before YA even existed. Amazing.”

According to the list provided by BCPS, 86 schools—including Gulfstream Academy (K-8), Annabelle C. Perry, Beachside Montessori Village, and Coral Springs (PreK-8)—have at least one copy of the book. Without knowing where the books are located in each school, no one can find out if the book is available by choice to any child through the library or whether it is being used as a supplemental resource or recommended by a specific teacher through a reading list.

“Arguably, ‘Forever’’s influence is so powerful it was almost the first and last word on teen sex,” Dawson opined of the book BCPS now may have available to Pre-K children as young as 4 years old. “Virginity was lost so perfectly it was almost as if no author ever need bother again.”

In Florida, the age of consent is 18 years old, and sexual intercourse with someone who is under 18 is considered statutory rape. However, Florida does have a close-in-age exemption—also known as “Romeo and Juliet law”—which protects underage couples who engage in consensual sex from prosecution when both participants are significantly close in age and one or both are below the age of 18.

Flaugh told The Epoch Times they are moving forward with their lawsuit.