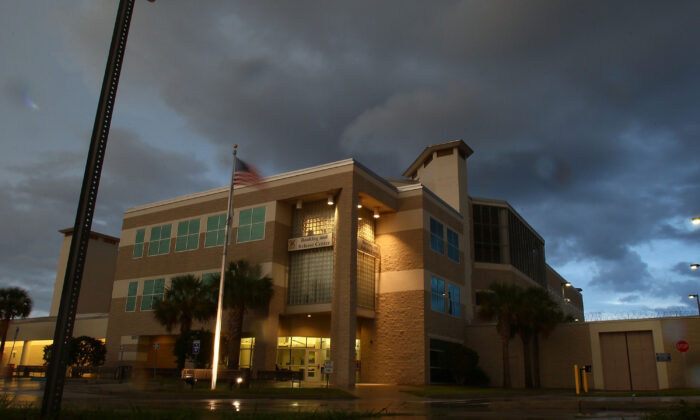 Storm clouds pass over the Booking and Release Center at the Orange County Jail in Orlando, Fla., on July 16, 2011. (Mark Wilson/Getty Images)
US News

Florida is facing a “tsunami of inmates” who may be released from local and county jails due to a critical staff shortage, according to state Sen. Jeff Brandes, a Republican.

As a result of inaction by state leadership, Brandes said, the state may have to release some prisoners because facilities are overcrowded and there aren’t enough corrections officers.

He said Florida’s prisons could house 60,000 inmates appropriately and manage them adequately, but there are more than 80,000 incarcerated. The total doesn’t include defendants behind bars while their cases are heard.

“I say overcrowded, but it is not because we do not have enough bed space—it is because of the lack of staff,” he said, adding that the system currently has one guard for every 250 inmates.

The state senator blamed the state’s legislators on both sides of the aisle for the problem.

“The state legislature failed to put any plan in place,” he said. “They don’t understand the depth of the problem.”

In 2016, the Florida Legislature commissioned a study on the prison system and asked for recommendations. The Crime and Justice Institute conducted the study and released a report in 2018.

“The analysis found that Florida is sending fewer people to prison than in years past, but those who do end up there are serving longer sentences, including those convicted of low-level, nonviolent offenses,” the report stated.

The report found that Florida’s prison population stagnated at 100,000 inmates, making it the third-largest in the United States.

The affected inmates were sent to other facilities, where Brandes said many were sleeping on floors.

Brandes said the incarceration rate is 21 percent higher than the national average. Florida’s elderly prison population is rapidly growing and is expected to reach more than 27,700 inmates by 2023. Most elderly inmates have significant medical needs. In 2015, the FDC spent more than $366 million on health care for inmates.

Along with staffing issues, programs for the inmates have been cut because of lack of teachers, Brandes said.

“We are just warehousing and not correcting anything,” he said. “There may be one teacher to every 1,500 inmates. We just don’t have the teachers; you can only cut the grass a few times with a person.”

According to Brandes, a pay increase for correction officers is a priority—which Gov. Ron DeSantis addressed at a press conference on Nov. 29.

The governor proposed $400 million in new funding to increase the salaries of all of Florida’s law enforcement officers, including correctional officers.

Brandes agreed this was a start, but said more needed to be done.

The senator proposed several things for the upcoming January legislative session, but he said the top priority should be reducing sentences for nonviolent offenders.

Other issues such as the aging population of the inmates needs attention, as well as the possibility of releasing inmates who are terminally ill, he said.

“These [terminally ill] inmates, instead of spending their last few weeks, or months, in confinement, they could be at home surrounded by family in their final hours.”

“This will allow a judge to take a second look at their case and the judge will determine early release based on their prison record,” he said.

“If the inmate has had good behavior, and participated in programs while incarcerated, the judge can reduce their sentence.”

Brandes didn’t expect much from this legislative session, as similar bills have been introduced in the past.

He said he feared the department of corrections was in crisis mode and would stay there for a long time to come if something isn’t done now.

“I think the legislature will continue to punt on this issue because it’s an election year,” he said. “Everyone likes law and order, but revamping the prison system to where it works is part of that.”